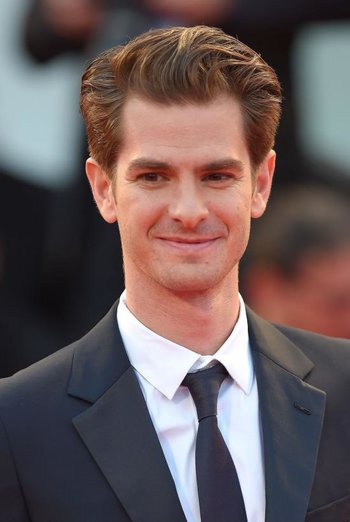 Some would call him amazing.
"You seriously think I'm a cop, dressed in a skin-tight red and blue suit?"
— Garfield as Spider-Man in The Amazing Spider-Man
Advertisement:

Andrew Russell Garfield (born 20 August 1983) is a British-American actor. With a dorky smile, a friendly disposition, and heaps of talent, it's not hard to see why Garfield is one of the most sought after actors working today.

Garfield was born in Los Angeles, to a British mother and an American father, and is of English and Polish Jewish descent. He has spent most of his life in the UK. If you're on TV Tropes at all, then you've probably seen him in a television show or two. With a BAFTA for his performance for Boy A, it was strange that Hollywood didn't pay that much attention to him in the earlier years of his career.

That is, until he burst onto the scene with his performance as Eduardo Saverin in The Social Network and as Tommy in Never Let Me Go, both released in 2010. (Also in 2010, he starred in a delightful short film called I'm Here. Trailer here

) Showing some amazing skill and giving some wonderful and heart-wrenching performances in both of his films, Hollywood has taken notice.

His Star-Making Role was Spider-Man in the short-lived The Amazing Spider-Man Series. He then appeared in historical dramas such as Mel Gibson's Hacksaw Ridge and Martin Scorsese's Silence. When he is not on screen, he has been known to take on theatre roles such as Prior Walter in Angels in America, for which he won a Tony Award.