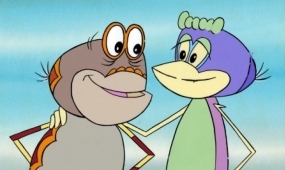 The water spider (right) and his diadem spider friend
Vízipók-Csodapók (literally: "Water spider - wonder spider") is a Hungarian animated series created by Pannonia Film Studio, initially running for 3 seasons in 1976, 1980 and 1985. In 1982, a feature-length movie edited together from the first two seasons got a theatrical release, which then got a digitally remastered re-release in 2019.
Advertisement:

exploring the world around himself, with the help of his grouchy land-dwelling cousin, a diadem spider

The show is notable for featuring numerous lesser-known spider species, and being one of the few shows that present spiders as heroic. Compare Maya the Bee, a German franchise with a somewhat similar premise, but focusing on bees rather than spiders.