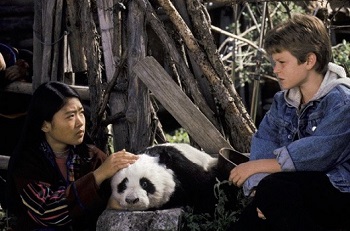 Ryan and Ling with the baby panda, which they eventually name "Johnny"
The Amazing Panda Adventure is a Kids' Wilderness Epic released by Warner Bros. in 1995. A Novelization was written by Todd Strasser.
Advertisement:

Ryan Tyler (Ryan Slater, Christian's half-brother) is a rather bratty American kid upset that his Disappeared Dad (Stephen Lang) has spent the last two years working with pandas. One day, Ryan is sent to China to visit his father's panda reserve. There, he meets his father's associate Chu (Wang Fei) and Chu's young granddaughter/interpreter Ling (Yi Ding of The Joy Luck Club). After a mishap with a Rope Bridge, Ryan, Ling, and a panda cub are separated from the adults. For the rest of the film, the adults try to find the kids, the kids try to find their way back to the panda reserve, and Evil Poachers try to get ahold of the panda cub. And the main characters have to get the panda cub to the reserve or else it will be closed down by Obstructive Bureaucrats.