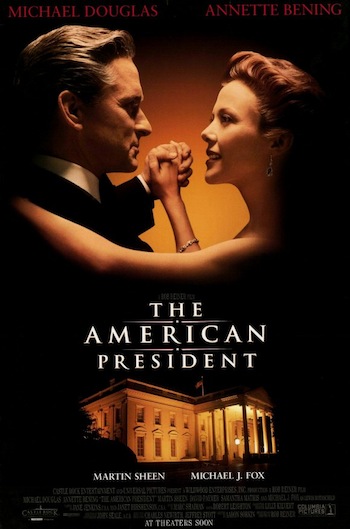 The American President is a 1995 romantic drama directed by Rob Reiner (in his first film after the infamous North) and written by Aaron Sorkin, starring Michael Douglas, Annette Bening, Michael J. Fox, and Martin Sheen. These days it is most noted for being basically a dress rehearsal for Sorkin's later TV series The West Wing, which included a number of the same actors, albeit in different parts.

US President Andrew Shepherd (Douglas), previously the governor of Wisconsin and a widower/single father, is on top of the world as the movie starts. His poll numbers are excellent, and together with his staff, which includes Chief of Staff A.J. MacInerney (Sheen) and Lewis Rothschild (Fox), he is planning to pass a major new crime bill. However, things change when he meets Sydney Ellen Wade (Bening), an environmental lobbyist who has been hired to push for new legislation. After the typical Meet Cute, Shepherd asks her out, and they begin dating, which of course draws major media interest.

This also grabs the attention of Senator Bob Rumson (Richard Dreyfuss), who has an eye to challenging Shepherd in the next election, and wants to use his relationship with Sydney to drag the President through the mud. This calls into question Shepard's previous "family man" reputation and his professional judgment as the "most powerful man on Earth."