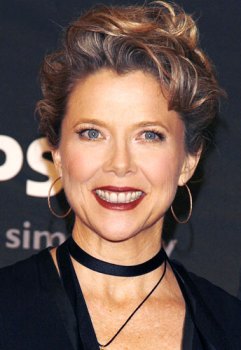 "I remember hearing someone say that good acting is more about taking off a mask than putting one on, and in movie acting, certainly that's true. With the camera so close, you can see right down into your soul, hopefully. So being able to do that in a way is terrifying, and in another way, truly liberating. And I like that about it."
Advertisement:

Annette Carol Bening (born May 29, 1958 in Topeka, Kansas) is an American actress.

She is a four-time Oscar nominee for her roles in The Grifters, American Beauty, Being Julia, and The Kids Are All Right, winning Golden Globe Awards for the latter two films, and she won a BAFTA and a SAG award for her performance in American Beauty.

However, it's entirely possible that her greatest achievement was capturing the heart of the notorious playboy Warren Beatty, whom she married in 1992.