It's Not You, It's My Enemies 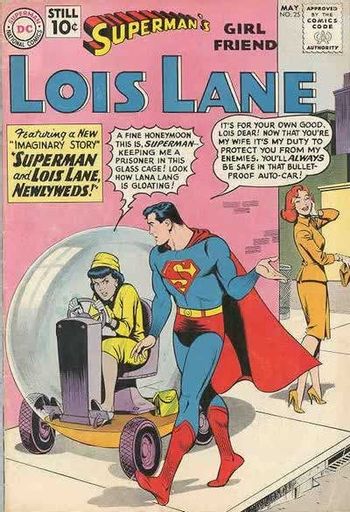 Because of Superman's enemies, Lois Lane must live in the Popemobile go-kart. And That's Terrible.
"No matter what I do, no matter how hard I try... the ones I love will always be the ones who pay."
— Peter Parker, Spider-Man
Advertisement:

Heroes have a dangerous job. They can accept that—for themselves. But not for their loved ones.

Love Hurts. Add the Sorting Algorithm of Mortality, and it's just plain unbearable. The Hero has a ready and willing Love Interest who makes him happy, who would be good for him, with whom even the fans want to see him. No Love Triangle, no Mayfly–December Romance, no Virgin Power, no Twice Shy—things could be perfect. It's plain as day that he cares more about her than anything else... plain to everyone, including the Big Bad. The Hero knows that his enemies will never let him have a love life in peace; they'll strike down the people dearest to him first chance they get. The only way to protect his beloved from becoming Big Bad cannon fodder is by letting her go. Despite what a noble, selfless move it is, the spurned Love Interest's reaction will usually be, "Screw the danger! I don't care!", to show they love The Hero just as much.

This adds It's Personal flavoring to a Story Arc, as a safe(r) relationship is the reward to look forward to once you've defeated the threat and made the world a safer place.

It never seems to occur to anyone that telling the Big Bad you've broken up is not generally going to get you released from his dungeon with an apology and a consolatory cappuccino. The argument also gets rather silly when the hero spends every waking moment in his civvies in or around said quasi-love interest's company; thus any villain looking at the situation would need Psychic Powers to realize they're not a couple. Of course, anyone with that level of understanding realizes that they are emotionally attached no matter what they say. Justified or not, this fear is why The Masquerade Will Kill Your Dating Life.

Though in all fairness, in a practical sense, this should actually ensure that the hero's loved one should be granted Plot Armor from this method. But the sad fact of the matter is that all too often it doesn't. In fact, the only way that a character would be safe is if they are considered too minor for writers to care about. (And, even then, these characters are not always safe, either.) However, there are also other certain flaws to consider, as villains are normally not known for being discriminate about their potential victims. So sadly, heroes, even if you do convince your enemies that your loved ones are random strangers you never heard of, chances are they will most likely go after your loved ones anyways. (Not to mention that normally heroes save anyone whom their enemies attack, regardless of whether if the Hero personally knows them or not, because it's the right thing to do.)

Usually unnecessary if the Love Interest is a badass too. Compare I Want My Beloved to Be Happy and Hero Harasses Helpers. A sub-trope of It's Not You, It's Me and Celibate Hero. May overlap with Loved I Not Honor More. May lead to Good Is Not Nice. Often the rationale behind passing the "Leave Your Quest" Test. When the love interest is the one who breaks things off for this reason, that's Love Cannot Overcome. See also Superheroes Stay Single. If it's between parent and child, see Give Him a Normal Life and Daddy Had a Good Reason for Abandoning You.

Marinette and Luka break up

Marinette decides that it's too dangerous for her to date anyone and breaks it off with Luka.

Marinette and Luka break up

Marinette decides that it's too dangerous for her to date anyone and breaks it off with Luka.