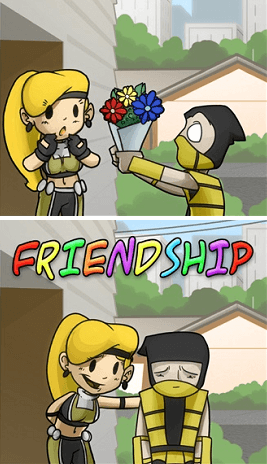 Friendship? Again?
Carly: I thought we talked about this. We can be buds, but you gotta get over this crush thing.
Freddie: I am over it! Seriously! I'm in love with you, you just want to be friends, and I'm totally cool living with that constant pain!
— iCarly, "iPilot"note Though truthfully he's trying to avoid pain.
Advertisement:

Platonic friends who have the possibility for romantic intimacy but explicitly reject it.

The force with which the two deny any feelings is always inversely proportional to the truth. Just Friends is in essence, a relationship, a potential relationship or teased relationship between people who are simply Just Friends, in a normal, and regular manner. When a character uses the line "We're Just Friends" but no one seems to believe them, this is likely to be the trope involved.

It is used in such diverse ways as being the central driving force of the actual series, a subtext undercurrent to a main plot or even pulled out of nowhere simply to create drama and tension. It is a safe trope to use for a writer, as it can develop in multiple directions, those directions can flip back and forth, and it can be done in a way that avoids overpowering the real 'genre' of a show until the writer decides to develop the relationship further. It can be delayed indefinitely, quietly abandoned or dealt with in any direction extremely quickly without making characters look bad. Viewers can easily relate to the trope as the experience of liking or loving someone who only sees you as a friend is common in real life.

All this trope really needs is two characters who happen to be friends for the possibility to exist and because of that this trope can crop up anywhere, in any medium, at any time.

There are genres where it is more common that others. It is used in SitComs or dramas with single characters as principals. It is very popular in teen-centric series where the most intense a relationship can get is kissing and networks want to avoid the Moral Guardians by avoiding one-night-stand-style hookups that turn into relationships. Can also pop up in a Cop Show or a Buddy Cop Show. Given enough seasons even the least likely shows can go through with a relationship that would be considered to be a Just Friends one.

It is an umbrella trope as the overall theme of a Just Friends relationship requires involving multiple other tropes to build up tension, develop viewer interest, develop the storyline and determine an ending to the relationship story arc.

The Relationship Upgrade is used as a major plot point for a season Cliffhanger or series finale. An easy way to generate tension.

It is also the title of a 2005 comedy film based pretty much entirely on the trope. It is now located at Just Friends.

This is a Love Trope and entries may spoil the endings of relationships and works as a whole. You have been warned.

Stevonnie just wants to stay friends with Kiki because they are a lot more complicated than they look. (Dub by Shelly Kitten on YouTube.)

Stevonnie just wants to stay friends with Kiki because they are a lot more complicated than they look. (Dub by Shelly Kitten on YouTube.)