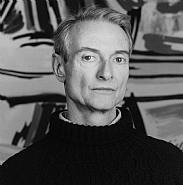 Roy Lichtenstein (1923-1997) was one of the leading artists of the Pop movement, along with Andy Warhol. At the height of his fame, his work mostly consisted of lithographs recreating panels from comic books, although he later branched out to abstract metal and plastic sculpture. Although he was American by nationality, he considered the Pop movement to be "not 'American' painting but actually industrial painting." He's best known for his lithographs, however, such as Drowning Girl

◊. He made use of such techniques as Ben-Day dots

His last commission was designing the logo of DreamWorks Records.