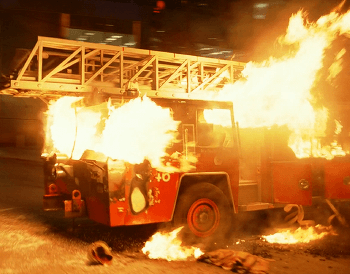 Fire fights back.
"Irony: The one form of humor that everyone thinks they understand, when actually no one really does. Truly, it is the cleverest joke ever played on mankind."
— Surviving The World, Lesson 618

The intended meaning is an inversion of the plain meaning. Pretty simple, really, but somehow a difficult concept for some to grasp.

Let's describe what irony is not, since that is where the confusion mainly comes from (and it's misused

Irony can overlap with those, but just by themselves, they are not irony. This is where the confusion of the meaning of the word usually starts. People try to apply it where it doesn't belong. It's rather common in fiction for one person to correct another who has incorrectly used the term.

It enjoyed a renaissance in the '90s thanks to Postmodernism, which is a slightly different concept of irony.

Types of Irony
There are seven main situations where Irony belongs: Socratic, Verbal, Dramatic, Tragic, Situational, Cosmic, and Historical. If something does not fit in any of these, it is not irony. Socratic

This type is completely different from the others. First employed by Socrates (hence the name), it's more of a debating tool than modern irony. Thus it rarely overlaps with the other types.

In a nutshell, this is the use of constant questioning in order to reveal the truth of any position. You know how kids like to ask "Why?" no matter the answer? This is the more sophisticated version. You keep feigning ignorance of the topic, in order to force the other person to explain it further. The irony lies in the fact that you are treating the other person as one possessing coveted knowledge and/or wisdom far above your "lowly" station, the whole point in doing so is to expose the fact that they are, in fact, not. Jon Stewart favors this method, as do many professors (particularly law professors).

Verbal
"The use of words expressing something other than their literal intention. Now that. Is. Irony."
—Bender defining verbal irony (though not, as he believes, irony as a whole; isn't that ironic?)

Verbal irony is part of the modern irony types, but it differs from the others in that the irony is intentional. Basically, you state something in a manner that has literal connotation, but expresses something different in the context of the situation. This may be done for any number of reasons, but typically the intent is either humor or emphasis.

Again, you have to intentionally create this difference in order for it to be verbal irony. If you deny that you're upset, but in an angry tone, that's just plain denial, not irony. You mean to try to convince people you are calm, but your tone betrays you. To be verbal irony you have to deny it in a calm tone, but deliberately make it clear you are seething on the inside and want the other person to know it. Note, however, that just because this example wouldn't be verbal irony, this doesn't mean it couldn't be ironic; the irony in this case would be situational, since it's not intended by the speaker.

Note, however, that although a sarcastic tone does betray the ironic intent of the words used, this does not mean that irony is no longer present. Indeed, it is only tone and context that distinguish verbal irony from outright lying. For example, take the film About a Boy. The main character's father wrote a hit song, and every time he mentions the song, people start singing it. When the eponymous boy and his mother do the same, they apologize, seeing the look on his face. When they mention he probably got that a lot, he politely says, "No, you're the first." If he had said it in a sarcastic (that is, openly derisive) tone, that would be sarcasm. If he had said it in a normal tone, and added something like, "In fact, I'd like people to do it all the time," there would be a hint of mocking, also making it sarcasm. But since he said it the way he did, it's just an example of verbal irony.

One non-sarcastic form of verbal irony is the "ironic simile". A common example would be the expression "clear as mud"; the message conveyed is the polar opposite of the adjective used, and this is made clear by the fact that the noun used for comparison is obviously not something possessing that quality.

Now, what about lying? Though it may at first seem as though they may overlap, this is not really the case. Verbal irony has the intention of getting the meaning across. As in the example from About a Boy, he did mean that they were not the first, but that he was being nice about it. In the case of most lies, the intention is not to give that hint; it's just outright deception.

This is basically letting the audience in on something of which one or more characters is unaware. Thus any actions or words from the character about this thing are ironic to the audience, because we know better.

Take the Disney version of Sleeping Beauty. Prince Phillip meets Briar Rose, but neither of them knows that other is royalty (and Briar Rose doesn't even know she is, herself). The Prince's father is horrified to learn that Phillip wants to marry a commoner, and it seems as though they can't be together, but we know who Briar Rose really is, so we know that they can.

So this literally applies any time the audience is in on something, and watching characters react without knowing what the audience knows. Often a key part of a screwball comedy, but it can just as easily be played for drama or tragedy, such as in Shakespeare's Othello, where the audience knows that Iago is lying long before the characters do.

Another way to create opportunities for Dramatic Irony in a story is to alter the chronology of its telling, by making use of Flashbacks or doing the whole tale Back to Front. This style allows characters to make promises that the audience already knows were ultimately broken.

Dramatic Irony has its own trope page.

In truth, a more fitting term would be "Expectational Irony", since that is what it covers. Situational Irony is when the outcome of some situation or action is the exact opposite of the expected or intended outcome.

A man who is accused of being gay tries to prove he isn't by discussing his muscles and virility with his (male) friends, however this comes across as an attempt to flirt with them.

Take the trope Failsafe Failure, for example. The expectation is for safety features to ensure that something is, well, safe, and then the safety feature itself turns out to be dangerous.

Or see the tropes The Cobbler's Children Have No Shoes and Self-Fulfilling Prophecy.

This, in a nutshell, is what people mean, or think they mean, when they say "that's so ironic."

This is a specific type of dramatic irony, usually found in a Tragedy, Film Noir, or in general a story with a Downer Ending. The character's words or even actions are not ironic to them (or perhaps anyone in the story), but the audience is fully aware that their actions will bring about a tragic or deadly result, all while they ostensibly fight against such a result.

A tragedy can have dramatic irony in it without being tragic irony; tragic irony depends on the audience knowing how the story ends ahead of time. This might be intentionally produced by a Framing Device, such as making the whole piece a Flashback so the audience sees the end first ("Two households, both alike in dignity..."), or it might be unintentional because the end of the movie becomes very well known, or somewhere in between those two, or it could simply be a story whose ending the viewer is expected to already know about from everyday life (such as Pearl Harbor, Titanic or The Passion of the Christ).

For example: Charles wants to save his father from being jailed for "helping" commit a murder he was framed for. In the process of clearing his father's name, Charles discovers that his father was innocent of that crime, but guilty of murdering Charles' mother, thus beginning the entire torturous process of trials, jail time, and eventual execution, as well as Charles learning something unforgivable about his father.

This would be Tragic Irony if the audience knew from the start that the father had murdered his wife (say, if it were shown early in the film) and could foresee that investigating the father would lead to that discovery. If the audience discovered that fact at the same time as Charles, then it becomes situational irony (at least, the first time you watch the film) because the viewers and Charles suddenly realize that everyone would have been better off if he had never started investigating.

Basically, the universe is screwing with you. The difference between this and situational irony is a matter of degree, but if it causes a mess of some sort, it's usually this.

Take A Simple Plan. It's situational in that the expectation is of course simplicity, but the way things tend to just snowball, often through no fault of the initiator, is this version.

The fact that most Self-Fulfilling Prophecies are caused by the very act of trying to prevent them.

This is any of the above (save for Socratic), through hindsight. We know it happened, and unless we don't get the cultural causes, we know why it was ironic.

Take the Oracle at Delphi's prophecy to Croesus that if the king went to war, he would "destroy a great empire." Since the empire that was destroyed was his own, it's a case of situational irony for Croesus (who chose to attack based on this supposed encouragement; his opponent was Persia, also a great empire at the time), verbal irony from the Oracle (who is entirely aware that Croesus will misinterpret her)note Assuming she knew that what she meant was "Your empire will be destroyed"; the Delphic Oracle was famous for giving answers that would be right no matter what. In this case, she would be right in assuming that one empire or the other would be destroyed, since they were both great powers that would fight each other to the death., tragic irony for the audience (who already know how this is going to go), and possibly cosmic irony (for those who believe in hubris, like many Ancient Greeks did), but since it's in the history books, it's also historical irony.

For some more lighthearted examples of historical irony, see This Is Going to Be Huge and It Will Never Catch On.

"Sort of like gold-y and bronze-y, but made of iron."

Joking aside, irony does have a metallurgical definition, and predates the more generally accepted use of irony by at least 100 years. Irony, as a term having to do with the metal iron, is pronounced "ai-er-nee" (rather than "ai-ruh-nee").

References to and spoofs of using "ironic" incorrectly:

Not to be confused with the opposite of wrinkly.

The Reds and Blues try to figure out whether teaming up is ironic or not, but end up confusing themselves in the process.

The Reds and Blues try to figure out whether teaming up is ironic or not, but end up confusing themselves in the process.