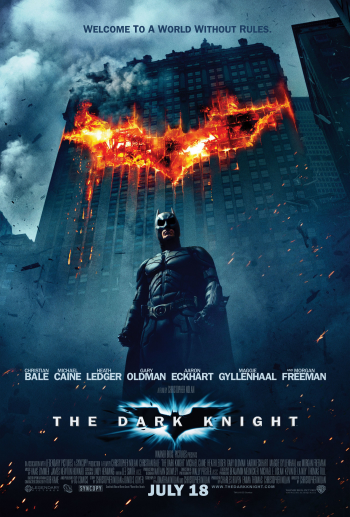 "The only sensible way to live is without rules, and tonight, you're gonna break your one rule."
"Some men aren't looking for anything logical, like money. They can't be bought, bullied, reasoned or negotiated with. Some men just want to watch the world burn."
— Alfred Pennyworth
Advertisement:

A year after the events of Batman Begins, Batman (Christian Bale), Lieutenant James Gordon (Gary Oldman), and District Attorney Harvey Dent (Aaron Eckhart) have achieved real success in taking down Gotham's organized crime by hitting the mob where it hurts: their money. The city's mob leaders become so afraid of Batman and what he represents that when a scarred psychopath in clown makeup shows up and offers to kill Batman, they hire him.

But once he's backed by the mob, The Joker (Heath Ledger) decides that simply killing Batman won't satisfy him. He aims to destroy Gotham City from the inside out, and part of his "plan" involves attempts to corrupt the city's two heroes (Batman and Harvey Dent) by making their lives hell until they snap...

The Dark Knight burst Out of the Ghetto, receiving an overwhelmingly positive critical reception as a serious drama, thanks in large part to the tour de force performances of its cast — notably Ledger as the Joker. While Ledger's performance and commitment to the role earned praise on their own, public opinion was also undoubtedly informed by his untimely death while the film was in post-production.

At its peak, the film was the second-highest-grossing film of all time in the United States (behind Titanic (1997)) and the fourth-highest worldwide (behind Titanic, The Lord of the Rings: The Return of the King and Pirates of the Caribbean: Dead Man's Chest). It also became the first comic book film to win an acting Academy Award when Ledger was posthumously given the honor of Best Supporting Actor.

The title of this film — The Dark Knight — marks the first time a Batman film has not featured the character's name in the titlenote although the Dark Knight is one of the epithets for Batman.

In 2020, the film was inducted into National Film Registry.

Followed by the third and final part in the trilogy, The Dark Knight Rises.

You wanna know how I got these tropes?:

open/close all folders
A - D

And sure enough, later in the film...

Bruce Wayne: Well, today I found out what Batman can't do; he can't endure this. Today you get to say "I told you so".
Alfred Pennyworth: Today, I...I don't want to. [they walk off together, then Alfred leans in close] But I did bloody tell you.

The Joker creates this dilemma for a boat full of civilians another full of (literal) prisoners.

The Joker creates this dilemma for a boat full of civilians another full of (literal) prisoners.