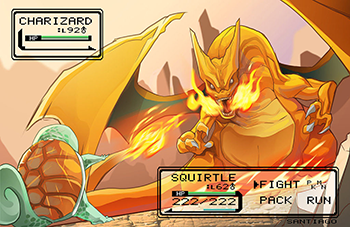 Gonna need more water to put out this fire.
Image

Unlike actual Rock–Paper–Scissors, type advantages are not the final say on who's going to win a given matchup in strategy games and RPGs — if a character (or unit) is strong enough, they can come out triumphant against somebody with even the most outlandish of inherent type advantages against them. This can be a potential Moment of Awesome for the character to defeat an expected Curb-Stomp Battle.

While usually limited to games (or occasionally to other forms of media based off of them), it still has an advantage over its more widely-used cousin, the Worf Effect: You don't need to waste any time establishing the talents of your victim. If you've got a fire user you want to demonstrate the power of, you can set them loose against even a handful of water-based mooks you had show up five seconds ago, and the effect is still achieved.

Often the reason people sometimes have cases of Elemental Ignorance, if they can win consistently in spite of their supposed disadvantage. Alternatively, if someone is a Poor, Predictable Rock and knows it, they can train specially to fend against the element that's supposed to counter them, diversifying their skills while remaining true to their art - and often providing a nasty shock for opponents who think they'll have an easy fight simply on the grounds of having the counter element.

Related to Elemental Tiers, where some elements are stronger than others regardless of advantages or disadvantages; I Am Not Left-Handed, where a character who had been losing reveals to have to been playing under a handicap; Cherry Tapping, where a character defeats another character with an intentionally weak or ill-suited weapon just to humiliate them; and Immunity Attrition, where the "rock's" alleged immunity to the "scissors" could be overwhelmed given enough exposure.