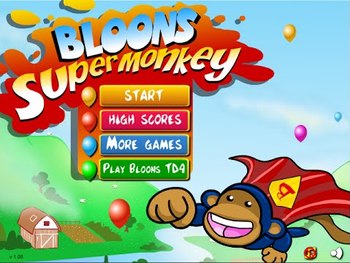 The first one's plot is pretty simple. You are a Super Monkey, and you are stopping an attack by the Bloon Empire.

The sequel features a much more advanced Tech Tree, consisting of attacks for both arms AND an additional one for the core. There are several branches: Dart, Boomerang, Explosives, Magic, and Tech.In addition to that, there are also Research upgrades that can bring out more power to your arsenal and Epic Powers, which are special abilities you can toggle on and off in the Upgrades menu.

In both games, you collect Power Blops, used to buy upgrades. However, in the sequel, they are converted to Blop Cash so you can buy upgrades.

A mobile game has been released, and is the first mobile Ninja Kiwi game to feature 3D models instead of sprites.