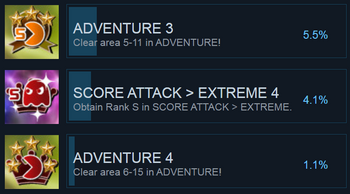 Note the difference between the last two achievements' "players who have it" percentages.
"Motti has begrudgingly admitted that Dash Race was too hard."
— Atlus, on That One Achievement in 3D Dot Game Heroes
Advertisement:

Related to Last Lousy Point, this is that one achievement (or trophy) that keeps you from true 100% Completion. It's particularly jarring to players when most of them were easy, or at least fairly easy, to obtain. Some players loathe these with a passion. Others delight in actually getting these just to rub everyone's nose in it. Of course, there are those who are apathetic about it, but they are unlikely to be hunting for these in the first place.

It can easily involve The Computer Is a Cheating Bastard, Luck-Based Mission, Fake Longevity, or Fake Difficulty, though in many cases, the difficulty is indeed legit. It often needs to be unlocked in That One Level, during That One Sidequest (of which it is a Sub-Trope), or while fighting That One Boss. Often it's something absolutely no one would think to do. Maybe it's impossible or nearly so without buying something with real money first. It might require you to clear the Brutal Bonus Level or defeat the nastiest Bonus Boss. You may have to beat the game on Harder Than Hard or under conditions that would otherwise be a Self-Imposed Challenge. Worst case scenario, it's rendered unattainable due to a glitch, or requires an online connection to a server that no longer exists, never did exist, or no longer ever has enough people on it at once to satisfy the achievement. And then, of course, there's the "Get All Other Achievements" achievement, which naturally falls into this if one or more other achievements are hard to get.

, as well as the global achievement stats pages on Steam, can show you which achievements are likely candidates for this trope. If an achievement has a significantly lower percentage of players who have it than any other achievements for a particular game, you're likely looking at this trope.

Often discouraging to achievement hunters, especially if it's on a system that gives an achievement for getting all achievements. Contrast with the Effortless Achievement and Achievement Mockery. Like with other tropes in That One Index, this does not apply if every achievement is extremely difficult to get unless there is one that is so tough, it stands out by even that game's standards.