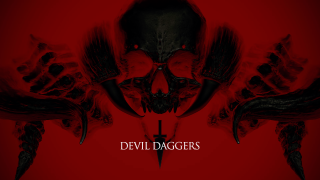 In 2016's Devil Daggers, you have one goal: live as long as you possibly can. Surviving, however, is difficult when you have a legion of flesh-hungry eldritch monstrosities tracing your every step. However, you are, quite literally, armed, with your hand able to shoot out a stream of piercing daggers that appear to be made from your blood in a machine gun-like stream or shotgun-like burst. There's no story, minimal HUD, and no tutorial — the only thing that will keep you alive is your own skills and ingenuity — and even then, that will only get you so far until the monsters overwhelm you.

for about $5, developed by one of the members of HITBOX Team, known for their work on Dustforce. It is an arena shooter that is built for multiple repeated playthroughs and is a send-up to classic 90's shooters like Quake and Doom. The game also boasts a minimalist design — very little is directly communicated through the player through words, leading the player to figure out how to do everything on their own and what anything in the game actually means. A fansite can be found here

where players can view leaderboards, a bestiary of the game's enemies, and share community made spawnsets of the game.