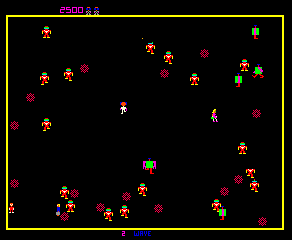 "A game like Robotron ... that separates the men from the boys."
— Trent Reznor on his favorite video games.

Robotron: 2084 (often called simply Robotron) is an arcade game created in 1982 by the company Vid Kidz (Eugene Jarvis and Larry DeMar) for Williams Electronics. It was unique at the time in that the controls were two 8-way joysticks (one for running, one for shooting) rather than the more typical single joystick and fire button.

Each level, or "wave", of Robotron consists of a small humanoid mutant ("the last hope of mankind"), representing the player, in the center of a swarm of enemy robots. The player uses the two joysticks to simultaneously move away from the enemies and dodge their shots with one, while firing back at them in the direction of the other. Once all the destructible enemies are eliminated, the player progresses to the next wave, facing increasingly faster and more numerous enemies. Like Tempest, it mixes brutal, high-speed gameplay and psychedelic graphics.

Scattered around the playfield are slow-moving "humanoids" to rescue, clones of the last human family consisting of Mommy, Daddy and Mikey. Touching each of these clones before they are killed by Hulks or Brains earns the player 1,000 to 5,000 points, progressively in steps of 1.000, which resets to 1.000 points if the player dies or the "wave" changes. The game is not winnable so death is an eventual certainty, but an extra life is earned every 25,000 points, making rescuing humanoids an important objective. This is especially true in levels featuring Brains, which can grab onto the humanoids and mutate them into super-fast death machines.

The inspiration for the dual-joystick control (left to move, right to fire) came from an injury Jarvis sustained to his right hand in a car accident. The game "Berzerk" also played a role, for Jarvis envisioned being able to move and shoot without having to stop (Berzerk uses a single joystick, the player has to stop moving to aim and fire).

Robotron 2084 has two spritual successors in 1990's Smash TV and 1992's Total Carnage, not to mention being the precursor to the move/aim controls in First Person Shooters and Flash games. The game also received a direct sequel titled Blaster, but it doesn't play anything like the original.

Robotron 2084 has examples of: