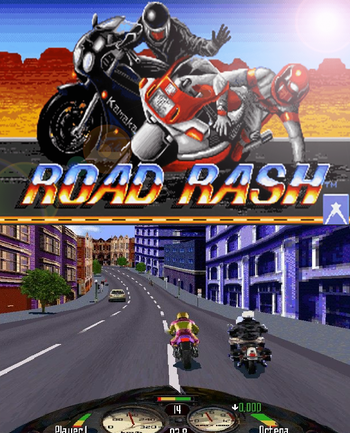 Road Rash was a series of motorcycle racing games from Electronic Arts, starting life on the Sega Genesis in 1991, but appearing on several other systems over the next 10 years. In-universe, the races were illegal, forcing you to contend with police... as well as other riders, who usually had no problem attacking you with clubs, pipes, chains or cattle prods. Each game had several track locations, which became longer and more difficult for each level you achieved. You leveled up by getting at least 3rd or 4th place in each location, depending on the game. The goal was to amass money to buy better bikes and also be able to pay off hospital fees, repair bills and police fines. If you ever ran out of money, it was game over.
Advertisement:

The first game, seeing numerous ports through the 1990s and rereleases later on. The game takes place on various rural roads in California.The sequel to the first game, taking place in five different U.S. states. The game uses recycled graphics from the first game, and introduces nitro boosts and tweaks to the combat system.The first game in the franchise to use 3D graphics for the tracks; most of the objects on screen are sprites. The game is the first to use CD-quality music and vocals (although not during racing), along with live-action cutscenes.The third game for the Genesis, utilizing digitized sprites and now taking place in seven different countries. The combat system received an overhaul and many more types of obstacles now face players. Motorcycles can be upgraded, and the game is generally faster than the previous titles.While using the cutscenes and menu artwork of the 32-bits version, this is essentially a different game that plays much like Road Rash 3. Notably, this is the only version of the game to play the licensed tracks during the races.The first fully 3D game. Vocals now are the BGM for the races in this game. The tracks are pieced together from a single interconnected map of roads.Also fully 3D, this game was the Nintendo-exclusive release for Road Rash.Another fully 3D game.A very different game from the previous with the same name, built much like the Genesis games a decade earlier.

Road Rash 1 was notable for bringing the Z-axis and rudimentary physics to bear to both challenge and amuse the player, at a time when most other racing games barely bothered with such things. Going up hills slowed you down, while going down would cause you to accelerate... or, if you had enough speed, you'd soar through the air. In addition to the competitors and police, the player also had to watch out for oncoming traffic, animals crossing the road, and other realistic hazards. It was one of the earlier second-generation games to reward the player for doing something illegal.

While there was no plot to speak of (mostly because participating in extreme sports for cash prizes doesn't exactly need a plot), the games did have characters for their bikes. A notable aversion is Jailbreak, in that while it's pretty much an Excuse Plot at first, as in the player chooses to run with a gang, rise in ranks, and being acquinted with the Comic Relief live action cutscenes duo Steve "Spaz" Williams (better known as visual artists for lots of movies including Jumanji and Jurassic Park and Punt (played by a young Michael J. Anderson), things get nasty when Spaz got captured by the cops and Punt personally asks the player and their chosen gang to organize a jailbreak to free him. Many of the AI were given profiles and would often give you advice or trash-talk you before or after a race.

Not to be confused with Road Redemption, Road Rash's Spiritual Successor