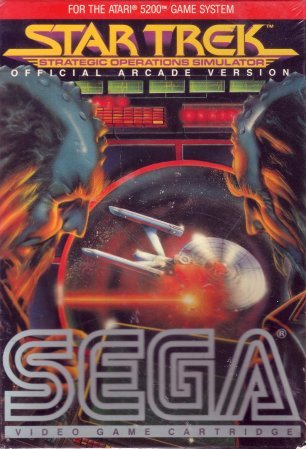 Star Trek: Strategic Operations Simulator is a 1983 arcade game released by Sega, which is based on the Star Trek franchise. In the game, you control the Federation starship Enterprise in a simulation game where you must defend a Federation starbase from attacking Klingon Birds of Preynote Arguably, the Klingon vessels look more like the D7 battlecruiser from the original series. You are equipped with shields, phasers, photon torpedoes, and warp drive. Your shields can only take a few hits before they go down, then after that all hits will damage your ship until it is destroyed, ending the simulation. By docking with the starbase, you can repair your ship and recharge your shields. In various subsectors you must also navigate through a meteor shower as well as fight against Nomad the android as the sector's boss.