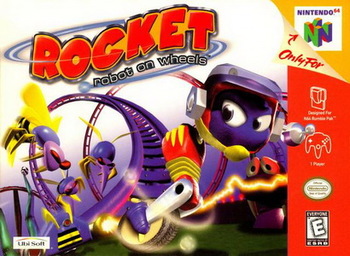 Long, long ago, in the mists of time, there was a console known as the Nintendo 64. And for that console, a small, fledgling company known as Sucker Punch—yes, the same ones behind the Sly Cooper franchise and Ghost of Tsushima—made a brightly-colored, cheerful, 3D, physics-based (!) platformer called Rocket: Robot on Wheels.
Advertisement:

Rocket was Sucker Punch's first foray into the video game world. The "plot" takes place entirely within Whoopie World, an intergalactic theme park maintained by one kindly Dr. Gavin. The day before Whoopie World opens, the doctor leaves for a party. He puts his loyal robot Rocket in charge of the park's command center for the evening: He just has to keep an eye on the tickets and tokens, and make sure the park's mascots, Whoopie the walrus and Jojo the raccoon, get fed. It's a suitable task for little Rocket, who's only got one wheel and has to interact with the world by means of a head-mounted tractor beam.

However, Jojo is sick of playing second fiddle. He knocks out Rocket, kidnaps Whoopie, and sends the pristine park into total disarry by dismantling all the machinery, and scattering the tickets and tokens. Now Rocket has to fix the machines, reactivate the rides, gather up all the tokens, defeat Jojo, and make sure Whoopie gets fed (as soon as Rocket rescues him). Suddenly, Rocket's job doesn't look so cushy anymore...

The game is notable for being one of the earlier console games to use a dedicated universal physics engine, with all objects being affected by friction, gravity, and other factors. Since Rocket's main means of attack is a tractor beam, it sort of had to be. Also, it makes for some slick platforming.