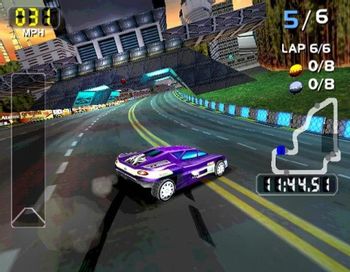 A series of arcade-style racing games, originally developed by Atari Games and released by Midway Games. The games focus on jump physics and wildly insane stunts instead of realistic gameplay, though it's possible to turn up the realism for more advanced players. True to the title, the races are held in the streets and environs of San Francisco (a simplified version, really), where the hilly terrain provides numerous opportunities to perform jumps and stunts.

Also, most tracks have a large number of shortcuts, some very obvious and some that can be found only after being very familiar with the track. The better shortcuts are more dangerous, requiring the player to determine the risk/reward of each in a fraction of a second.

The home console versions also have a stunt mode that really shows off the physics engine, and other extras like Battle Mode.