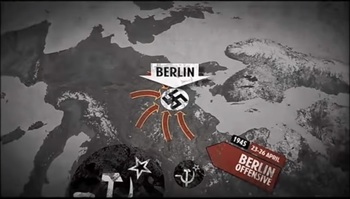 "When our flag flies over the city, our enemies' defeat and humiliation will be beyond question! Our vengeance will be complete."
— Sgt. Viktor Reznov, Call of Duty: World at War
Advertisement:

When a war breaks out, the different factions will each have their objectives and goals. Since they are at war, these goals will often be different. But one thing they will all have is a desire to take each other's capital city, or if they can't actually capture it, then at least inflict enough damage on it to create shock.

This is Truth in Television. For a soldier, bringing the war to somebody's home is already a powerful psychological attack. But the taking or bombing of an enemy capital is a sure way to let the enemy know that things are REALLY bad now. Seizing the capital especially, as it is often the battle that ends a war, particularly if the political leadership was captured or killed in the process. However, just as often, the fight will continue, although the losing side's military may have taken some serious damage. In these cases a Government in Exile will be formed.

Capital cities that are unfortunate enough to be near the border are often the most vulnerable. However, on the flip side, the war may not end immediately in such cases since there will still be a lot of country left and likely a strong military force still very much in the game. Capitals that are further away are much more difficult to attack, but by the time you fight your way there, the enemy will likely be much more depleted. In either case, the retaking of the capital will now be the highest priority of the faction that lost it.

This trope also applies to a Civil War as well, since the government will want to hold on to the seat of power to show they are still in charge, while taking it can help the rebels signal that the old regime is falling.

This can be seen as a super-trope of Washington D.C. Invasion, which deals with similar scenarios in the United States capital.

When the objective is taking out the enemy commander, you have Straight for the Commander. Expect there to be a lot of Monumental Damage as well, given how many nice, shiny landmarks are often sitting there waiting for a tank shell or a bomb to hit them. Urban Warfare is a given here, especially when fighting takes place in the capital itself.

With Seelow having been captured by the Red Army, they can now freely advance into Berlin, the capital of Nazi Germany. Against millions of battle-hardened Soviet troops, the Nazis can only muster some tens of thousands at most to defend their ruined capital.

With Seelow having been captured by the Red Army, they can now freely advance into Berlin, the capital of Nazi Germany. Against millions of battle-hardened Soviet troops, the Nazis can only muster some tens of thousands at most to defend their ruined capital.