Literature / The Book of Mormon 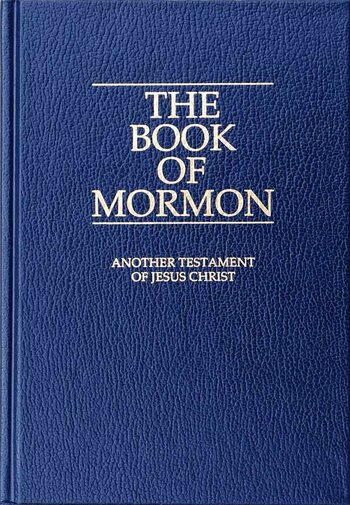 And so it came to pass...
Advertisement:

... That we have a trope entry on The Book of Mormon

, a book of scripture used by The Church of Jesus Christ of Latter-day Saints and its splinter groups alongside The Bible and the Doctrine and Covenants. The Book of Mormon is the main piece of holy/'god-given' writ that distinguishes Mormonism from Catholicism and the various Protestant sects, and the unofficial name of the religion, Mormonism, derives its name from the book. The Mormons regard the book as divine scripture equal to the Bible in importance. In the 1980s the church added the subtitle "Another Testament of Jesus Christ" to help clarify that the primary subject of the book is the gospel of Jesus Christ.

The book claims to be an accumulation of the writings of a people descended from Israelites who immigrated to the Americas around 600 BC. The eponymous Mormon and his son Moroni, the last prophet/scholars of their people, edited and compiled the majority of the book from numerous existing texts, inscribing the final record on sheets of gold-colored metal or 'Golden Plates' in a script based on Egyptian Hieroglyphs.note Which, despite the discovery of the Rosetta Stone by General Bonaparte's troops during his Egyptian campaign, had yet to be 'cracked' during Mr Smith's lifetime. Moroni, one of the last survivors of his civilization, buried the plates around AD 420 with the promise from God that they would one day be brought forth again.

Joseph Smith, a young farmer in upstate New York, claimed that in 1820 Moroni appeared to him as an Angel and led him to where the plates were buried. Joseph Smith, with the aid of an artifact also delivered with the plates called the "Urim and Thummim," was blessed by God with the power to translate the text into English and dictated the contents to a scribe. The Book of Mormon was published in 1830 and the Church of Jesus Christ of Latter-day Saints was formed shortly thereafter under Joseph Smith's leadership. The claim of divine aid in bringing forth the book has made it a controversial subject ever since.

The book's actual contents don't get discussed much outside of Mormon circles—most non-Mormons find its origin story so outlandish that they dismiss the book as an obvious fabrication without the need to read its text.

There have been some changes to the text since the first edition. The earliest and most extensive changes were made by Smith himself in later editions.note The original manuscript as written by the scribe Oliver Cowdery did not have any punctuation, various printers' manuscripts by different individuals had inconsistencies of punctuation, spelling, and grammar, and sometimes factual mistakes (like switching the name of who was talking). Early editions were formatted like a regular novel; numbered verses like in the Bible were added later. Modern editions after Joseph Smith's death have made minor changes in the text itself but have been mostly restricted to chapter headings, footnotes, and other study helps. Critics of the book have claimed that major revisions have been made to make the text more appealing to modern audiences.

In structure, the Book of Mormon resembles the 'historical books' of The Bible, being divided into a number of books which largely form a narrative, which is punctuated by accounts of sermons and editorial commentary. It begins with a few families in Jerusalem, follows their journey across the ocean to a new "promised land" in the Americas, and then tells the history of the nations founded by their descendants, with emphasis on the preaching of the prophets, the spiritual condition of the cultures, and various events like several major wars.

Also included is the visit of Jesus Christ, who appears to the people after his resurrection, teaches them, and founds his church and a Utopia. Unfortunately, this doesn't last; after several centuries, the people become wicked and divided again, and eventually a whole nation is destroyed. At this point, the last few prophets (Mormon and Moroni, as already discussed) add their last comments and bury the book.

The narrative switches between firsthand transcribed accounts of the events and summations as done by Mormon to get to the heart of the story. Books are mostly named after their primary historical author, but due to the vast number of individuals involved and the need to simplify, this doesn't always hold true. As such the Book of Omni, only a few pages long, is actually minor contributions from a half dozen writers, and Alma, the namesake of the longest book, is absent through the last third (it continues until all of Alma's sons have died, a pattern continued in the book of Helaman).

There are several dominant and recurring themes in the book. Some are theological, like the divinity of Christ, or that those blessed by God can sin and lose those blessings, while those who sin can repent and be blessed. Other themes involve the idea of liberty and choice, secret societies, and perhaps most prominently individual and national pride, which leads to the destruction of multiple nations.

This page is about the tropes used in the The Book of Mormon itself, not about determining its authenticity or spiritual value. This is simply tropes that were recognized and whether or not these existed at the time of translation/writing or not is not any Troper's problem.

For more information on the church itself and other historical details see Useful Notes: Mormonism.

Should not be mistaken with the musical The Book of Mormon.

The Book of Mormon provides examples of...

open/close all folders
A - C
D - M
N - Z
I, a troper, having been referred by goodly websites, therefore I was taught somewhat in all the markup of my father; and having seen many walls of text in the course of my days, nevertheless, having been highly favored by the admins in all my days; yea, having had a great knowledge of the tropes and popular media, therefore I make a wiki of my proceedings in my days.