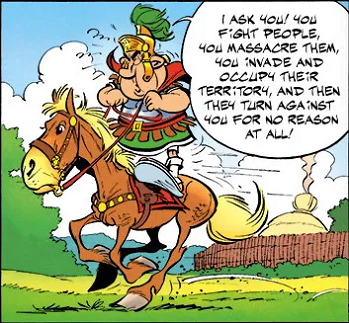 A trope whereby some in-universe group moral standard is hypocritical because the morality of an action depends entirely upon who is doing it. It is, in short, a moral double-standard. What is justifiable for one group is, in their eyes, criminal for another.

There could be any number of reasons for this, but they all basically boil down to some innate moral superiority which is taken for granted. Note that moral superiority is often assumed first, and justifications come after. This makes it easy to mix and match justifications as necessary depending on the circumstances. A character or group is good because that's "who they are," and therefore anything they do must have a justifiable reason for it, and anything they want they automatically have a right to have, because surely withholding something from such morally good people is wrong.

Likewise, if they do somehow manage to commit some crime or atrocity, this is considered an aberration: something that goes against their innately moral nature — a mistake soon left in the past, followed by an inevitable return to the right path. Meanwhile if their enemies do the same thing, it is considered a reflection of their innately immoral nature, because deep down that is who they are, and evidence of an inherent moral defect.

Moral myopia is common in Real Life and therefore Truth in Television, both on a societal level and on a personal level. Most people believe that, deep down, they are a "good person", regardless of the actual morality of their actions, and are likely to make similar excuses for themselves and friends. Meanwhile they are unlikely to make excuses for strangers or people they dislike.

Moreover, people understand their own thoughts, emotions and motives that cause them to act immorally, while other people's thoughts, emotions and motives are outside personal control and therefore not nearly as easily trustworthy. It doesn't help that some people outright lie about their situations, making it more unlikely to label their actions as anything other than inexcusable, fundamental immorality.

Lack of Empathy also results in people justifying their own immorality while condemning the immorality of others.

Compare Convicted by Public Opinion, when the general public have already given the "Guilty!" verdict because they personally dislike the accused. Contrast Hypocrisy Nod and At Least I Admit It.