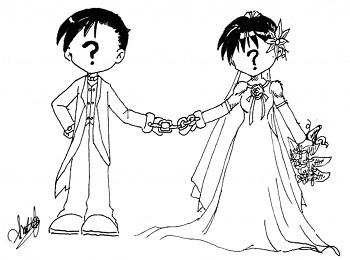 "We who are of noble blood may not follow the wishes of our hearts."
— Jane Olsen, The Cabinet of Dr. Caligari
Advertisement:

An Arranged Marriage is, quite simply, the idea that someone is going to choose your spouse for you.

The way an Arranged Marriage is treated by the plot will be dependent on place and time. For most of human history, arranged marriages were the norm because "marriage" was less about the union of two souls and more about the union of two families. The rise of the "Marry for Love" ideal didn't really start in Western culture until the 16th century, and there are places on Earth where it still hasn't. Additionally, the "Marriage Before Romance" trope often went hand-in-hand with arranged marriages. While the priority is, again, the union of two families, that union is dependent on the stability and comfort of the two people getting married, so the two families would try their best to come up with a Perfectly Arranged Marriage. The couple's happiness just wasn't the main goal the way it is in Western marriages today.

However, the one thing that is almost always present in an arranged marriage is tension. Most people don't really want to marry a total stranger (much less have sex with them), and if that total stranger turns out to be a complete rogue and a cad, it may be necessary for the heroes to spring into action and rescue the hapless member of their group who is being forced to walk down the aisle. (Of course, being Big Damn Heroes, they'll have to do so in the most overblown and dramatic way possible.) Sometimes, the person in the arranged marriage takes matters into their own hands and becomes a Runaway Fiancé. The "aggrieved" party may claim Breach of Promise of Marriage in response, as arranged marriages tend to be viewed as legally binding commitments by those who initiate it. Alternately, there's a Love Triangle. The character of the suitor is less likely to be important in those cases, but they generally won't look kindly on the outsider's interference.

It's worth noting that historically, an arranged marriage would not usually be to a complete stranger as far as most people were concerned. Most marriages took place between families that knew each other well—perhaps as vassal and liege, business partners, or (for the vast majority of the people that weren't merchants or noblemen) simply neighbors and friends. At least in the context of Europe, prospective spouses would have opportunities to interact socially and form an opinion of each other, and their feelings would naturally factor into their parents' thinking on the matter. The modern stereotype did, however, often apply to the political marriages of the royalty and high nobility, where the spouses might not even speak the same language in extreme cases.

Conversely, an Arranged Marriage can be used to lock the hero and heroine together so that their disputes can not end with one of them washing their hands of the other.

A common tactic is for the daughter of a wealthy but common family to be matched with the Impoverished Patrician, for his title: Nobility Marries Money. Occasionally, it's the other way around, with a titled daughter and a moneyed son. Families may even pledge infant children in marriage pacts that cannot be concluded until many years later.

Both in fiction and in Real Life, royal children (sons as well as daughters) were used as pawns in the political game cementing alliances and peace treaties with their marriages. You might say it was their job to take part in such Altar Diplomacy.

The Arranged Marriage is Not to Be Confused with: a Childhood Marriage Promise (whereby a prepubescent couple voluntarily pledges their own non-legally-binding, future troth); a marriage which may arise out of convenience; or a marriage that arises from some kind of cultural mistake. For clarity's sake, the Arranged Marriage trope will deal only with more binding, traditional types of unions.

See also Parental Marriage Veto, You Have Waited Long Enough, Old Man Marrying a Child, Homosocial Heterosexuality, Royal Inbreeding, and Marriage Before Romance. A Shotgun Wedding is a short-notice forced marriage. If someone agrees to an Arranged Marriage but loves someone else, Courtly Love may be involved. If the people doing the "arranging" in the marriage aren't the parents, that's a Bureaucratically Arranged Marriage.

Often involves Prince Charmless and Rebellious Princess. At least recently, one of the potential spouses was as likely as not to try to defy this. When the audience really doesn't want this marriage, expect the Big Damn Heroes to show up right at the Speak Now or Forever Hold Your Peace line.

To see the types of follies and foibles associated with modern dating services, see Dating Service Disaster. Supertrope to Perfectly Arranged Marriage. Can overlap with Marriage of Convenience. Contrast Marry for Love. Compare And Now You Must Marry Me. Compare and contrast Fourth Date Marriage, where the couple likewise barely knows each other but it was Love at First Sight. Also see Wedlock Block.