Let Me at Him! 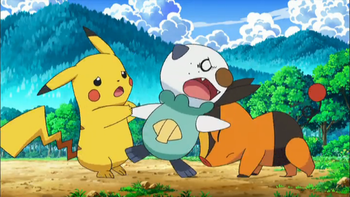 WHO DOES HE THINK HE IS?! I'LL MURDER THE BUM!!
Mrs. Beakley: Oh dear, no sign of them yet. Should I call the police?
Scrooge: Aye, to hold me back when those rascals finally get home!
— DuckTales the Movie: Treasure of the Lost Lamp
Advertisement:

A detective (rarely a great one, though), angered by a possible or actual perp being smug, lunges for them and has to be restrained by fellow officers. Not usually part of Good Cop/Bad Cop, more sheer hatred on the part of the detective (often when It's Personal). Particularly vulnerable to stuff like If You Kill Him, You Will Be Just Like Him! when there is actual murderous intent (this is quite rare in police shows, though).

This trope is very easily Played for Laughs both within and outside the police procedural.