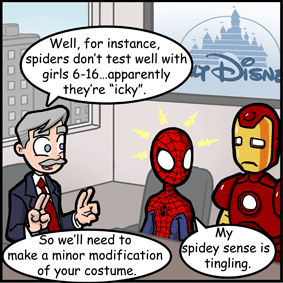 "Instead of 'spidey-sense', now it will be 'pixie sense' and instead of 'tingling', we're thinking 'bubbling'."

"Now Pinky and the Brain share a new domain.
It's what the network wants; why bother to complain?"
— The theme song to Pinky, Elmyra & the Brain
Advertisement:

As one person rarely has the financial resources to create and more importantly distribute their own television shows, movies, comics, etc., entertainment is generally produced by corporations. They are the ones that put up the money to see your favorite book turned into The Film of the Book. But if the television network or studio doesn't actually turn a profit so they can pay their corporate bills, the business folds and is likely to take the show with it. So what can you do?

In the end, the bottom line is the bottom line; it is the company's best interest to see that their money is well spent, budgets are kept, and the show gets finished by Sweeps week. Often this means vetoing ideas, or dictating that certain elements be added in. So when the organization behind the creators takes a hand in creation you get this trope: The goal of an executive is to try to steer the show into the direction of profitability.

These changes tend to come about by ensuring that a work is relatively risk-free. Controversial elements may be removed to preemptively avoid receiving backlash or alienating the audience, while safer alternatives may be added to ensure the viewership is as wide as possible. Less profit-minded executives may change things in an attempt to kill the work outright because they want the show dead for one reason or another, though this isn't common since it's counterproductive to making a profit. It's possible that an executive is a fan of a work's genre, and decided to join in on it because they can spot any flaws before they happen and guide the writers away from them, using an Executive Veto to tell them not to.

Sometimes executive meddling exists in one show (or movie, or other medium as brought down by the studio or publisher) in order to promote an entirely different show/movie/etc. on the network/by the same studio/publishing company (or some other event or thing the executives in charge want to promote). This usually manifests itself in the form of Crossovers and Product Placement, among other devices.

While this tends to have negative connotations due to the idea that the people calling the shots are not the creative heads, the results can be positive. Executives aren't always wrong, after all; just like there are good and bad creators, there are execs that are good at their job and execs that are bad at it. Alternatively, a creator can be inspired by the execs' ideas and make something even better. Creators have the capacity to cause issues because of a Creator Breakdown, or too much Protection from Editors leaving their ideas unchallenged regardless of their quality, or putting in an unnecessary Author Filibuster or Writer on Board moment that can taint a work. All of these issues can be stopped if a higher up puts their foot down, and the work can benefit from it. But since when does someone doing their job right get any attention? No one complains when the system works. However, when something breaks, EVERYONE knows about it.

Also, creators talk much more to the public about the creative process than do the executives, and creators, like most people, tend to like to take credit for what went right and pass blame for what went wrong. As a result, there is reason to believe that harmful cases of executive meddling are rare but over-reported, while helpful executive meddling is common but under-reported.

For more on some of the reasons this is commonly seen as a bad thing, see this analysis page.

The reason behind many an Enforced Trope.

See also Music Is Politics, Obvious Beta, Media Watchdog, Moral Guardians, and Alan Smithee. Compare What Could Have Been, Wag the Director, Development Hell, and Vaporware. Sometimes, an Obvious Rule Patch will be the result of this. Contrast with Getting Crap Past the Radar and Protection from Editors. Screwed by the Network, Friday Night Death Slot, and Dump Months are similar to the sabotage version, but the work's content is usually left untouched. For fictional examples where one interferes with another's work, see Too Many Cooks Spoil the Soup.

Please remember that Tropes Are Tools when adding examples.