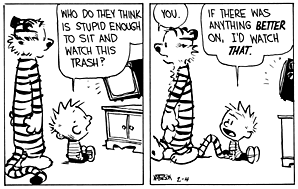 Sooner or later, he'll learn to live without the TV.
"No one in this world, so far as I know — and I have researched the records for years, and employed agents to help me — has ever lost money by underestimating the intelligence of the great masses of the plain people. Nor has anyone ever lost public office thereby."
— H. L. Mencken, "Notes on Journalism"
Advertisement:

A common belief among film and TV executives is that everyone who watches media has the intellect of Beavis and Butt-Head.

This belief is a root cause of Executive Meddling, especially common among shows intended for children. Kids can legitimately be said to be less knowledgeable than adults, though we all probably know a depressingly large number of exceptions.

Of course, there is a "moron" demographic out there, and it has its members, but executives seem to believe that every person who watches TV belongs in it. This may be due to something known as the "80-20" rule in business — in this case, that market research shows that 80% of money spent on television-advertised products comes from the lowest 20% in terms of education and intelligence, so show-content is naturally geared towards them.

On top of that, not only are viewers stupid, they are also intolerant of people and things unlike themselves, ignorant, hate change, need to be instantly satisfied, and have the attention span of a goldfish.

Interestingly enough, though, this meta-trope sounds worse than it is, at least currently; actually comparing and contrasting the entertainment of today with the entertainment of the past will show that overall, shows demand more of your mind than they used to, probably because we'd be bored if it didn't and partly because things like recorders or the Internet now make it possible to examine shows in more depth more easily than in the past (read Stephen Johnson's book Everything Bad Is Good For You for an eloquent explanation beyond the scope of this article).

Of course, all that means is that the bar for entertainment is raised even higher, and that viewers will get annoyed more and more easily if things like Infodump happen a few times too many. Additionally, the caveat about this being what executives believe about viewers was, at least at one point, not particularly untrue. In the era of the "Big Three" networks (NBC, ABC, and CBS), before VCRs and the like, shows really were designed to be simple and supposedly "unobjectionable" narratives, for fear of making that one third of the entire TV viewing audience tune out and tune in to one of the competitors. This is why television quickly gained the nicknames Boob Tube and Idiot Box from intellectuals who found television pandering and simple.

Note that this viewpoint is not particular to network executives. Question some point of continuity for a children's show with a sizable adult Periphery Demographic, and you are pretty much guaranteed one of the periphery adult fans will insist that it's "because it's a kid's show and they don't expect kids to notice." Ironically, kids are often far more aware of such mistakes, not because kids are per se "smarter" than we expect, but because not having things like a job, spouse, or "real life" to distract them, they tend to watch their favorites much more obsessively and with more of their minds fully devoted to analysis. (Which makes them similar to others you may be familiar with.) Consequently, children can put even the strictest editors to shame with their awkward questions.

Lastly, this trope is not necessarily bad. Business administrators and anyone else whose job it is to explain things to others (like a coach or a presenter) know the "KISS" method ("Keep It Short and Simple", or "Keep It Simple, Stupid) because of the fear that if something is too complex then no one will understand it, which is certainly true of TV plots. Thus, it's not a bad idea for a writer to assume that their audience are not geniuses and write accordingly, as no one will be entertained if they can't follow along the story. Of course, great care needs to be taken, because if a writer makes their story too simple they also risk alienating the audience who will angrily invoke this trope.

Some of it comes from how people use TV, too. In some households, the TV is just on. The background noise and familiar voices add a comfortable ambiance to a home. These people may prefer programs you can tune in and out of, and not miss much. Face it, not every viewer is like a Troper, analyzing character's actions, and picking apart the plot. This does not mean the person is a moron, but when it comes to explaining the show that they "watch", they may sound like it to a troper.

For the less common polar-opposite, see Viewers Are Geniuses. When this trope and the latter trope conflict, however, you can wind up with an Unpleasable Fanbase.

For versions enforced by law (or out of fear of a potential lawsuit), see also Our Lawyers Advised This Trope.

Not to be confused with Humans Are Morons.