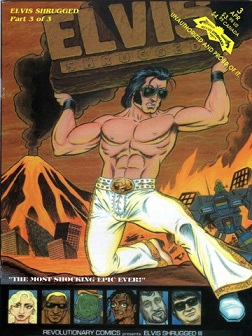 "The most shocking epic ever!"
"Is Elvis alive?"
Advertisement:

The story targets the music industry and MTV, with the premise that the Elvis Presley everyone thought had died in 1977 was actually a clone created by Presley's manager Col. Tom Parker, and that the real Elvis had gone into hiding and had convinced many other musicians to join him. Because so many quality musicians have disappeared, the recording industry, which has become a conglomerate called Time-Warner-Sony, has largely collapsed.

"And in the end there was only the sea and the sky and Madonna and Elvis Presley. THE END."