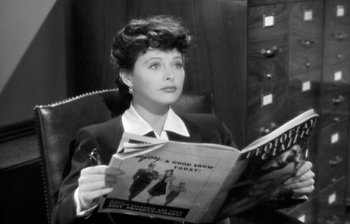 How can you dump Hedy Lamarr?
Advertisement:

H.M. Pulham, Esq., aka Harry Pulham (Young), is a middle-aged businessman living in Boston. Some of his old Harvard buddies contact him about their 25th anniversary class reunion. At the same time, Harry gets a call from his old girlfriend, Marvin Myles (Lamarr). A good two decades ago Harry broke up with Marvin, a career woman in the advertising business, and settled down to a more conventional married life with wife Kay (Hussey). The marriage has gone stale, though, and Harry's reflective mood and the arrival of Marvin throws him into a full-blown mid-life crisis. A series of flashbacks then narrate Harry's life, his romance with Marvin, and how he came to marry Kay instead.

H.M. Pulham, Esq. was co-written by Vidor and his wife Elizabeth, based on the novel by John P. Marquand.