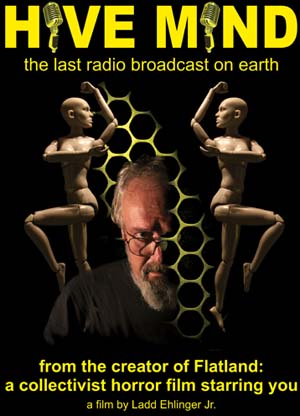 If you're looking for the trope of the same name, click here.

is a 2009 independent horror film directed and co-written by Ladd Ehlinger Jr.

It's about a post-apocalyptic world, where humanity has been forcefully assimilated into a collective consciousness known as ''Hive Mind''. Well, most of humanity has. There have been rebels and hold-outs. This movie tells the story of one of them (apparently the last one left): Doug Trench.

Doug was once a radio talk-show host, and even has all his old equipment. He's hidden out for years, but now his food supply is almost gone. His apparent prospects are either to starve to death or surrender. He opts for another choice. He takes out his old radio equipment and makes one final broadcast... one last act of defiance before he's found and dealt with.

The bulk of this film deals with that broadcast as Doug relays what happened and how it could have been avoided. Interestingly, this is pretty much a one-man show. There are no flashbacks and almost no other characters. We just see Doug in his basement, making his broadcast, telling his story, and making the occasional wary glance at his three security monitors... although that changes in the final act.

As a story, it largely averts the oft-used rule of Show Don't Tell to the point of practically giving it the middle finger. As a character study, it plays that same rule rather straight as Doug reveals quite a lot about himself just in how he behaves.

Is this experimental approach effective? Well, the movie's one-man-show concept means that it relies almost entirely on the lead, Greg Trent; not just his talent as an actor, mind you, but also his abilities as an engaging storyteller. So, whether this film works as anything beyond an Author Tract depends on whether-or-not you think Trent's performance works.

If nothing else, Hive Mind may be a good way for any libertarian tropers out there to explain their beliefs to their non-libertarian friends.