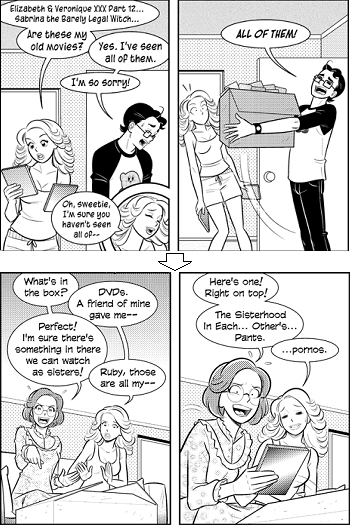 Awkward. Also, a callback between comics, in fact — from Sticky Dilly Buns to Ménage à 3.
Tony: Anybody remember when I carried a nuke through a wormhole?
Rhodey: No, it’s never come up.
Tony: Saved New York?
Rhodey: No, never heard that one.
— Avengers: Age of Ultron
Advertisement:

A relevant reference to an event taking place earlier than the timeline of the present story. One type of call back is a Running Gag. This is often used to remind viewers that there is an ongoing storyline. More or less a Shout-Out to itself — but if that's all that it's doing, then it's a Continuity Nod; a Call-Back brings back an element that is actually relevant again.

Alternately, in comedy: Tying the loose ends of a later, seemingly unrelated, joke to one earlier in the show; better known as a Brick Joke.

Sometimes a Call-Back will take up so much of a chapter or episode that it becomes a Sequel Episode to the earlier story it's referencing.

The opposite of this is either Foreshadowing (a forward reference done in a previous episode) or Call-Forward (a "fake" forward reference in a flashback or prequel). See also Chekhov's Gun, Chekhov's Boomerang, Brick Joke, Bookends, Mythology Gag, Sequel Episode, Internal Homage, and Meaningful Echo.

In the final scene of the first season of Gravity Falls, Grunkle Stan's secret from the first episode is finally revealed, and it leads to a few other revelations.

In the final scene of the first season of Gravity Falls, Grunkle Stan's secret from the first episode is finally revealed, and it leads to a few other revelations.