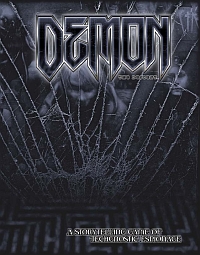 What has fallen may rise... or fall further still.

The ninth gameline for the Chronicles of Darkness, and vastly different from its original World of Darkness predecessor, Demon: The Fallen, due to, shall we say, rather different ideas about the God(-Machine) that the eponymous protagonists of both games once served.

Behind the scenes, quietly maintaining the miserable status quo of the Chronicles of Darkness, is a vast, nigh-insurmountable entity known as the God-Machine, a subtle, unknowable occult supercomputer with the power of, uh, God. This is not the God of the Bible, or the Qu'ran, or the Buddha, or innumerable pagan deities. No, the God-Machine's power flows from utter and undisputed mastery of physics, both mundane and not. Nobody knows its real agenda, not even its legions of angels, the sapient, autonomous programs that carry out its will.

Perhaps these same mysterious ways are why so many of them Fall.

Demons, known among themselves as the Unchained, were once these angels: they were faced with an order they couldn't abide, lost faith in their missions, or faced with a situation that couldn't be solved within their purposes' parameters. Faced with either reprogramming or recycling for their disobedience, the Unchained chose to Fall, absorbing the facade of humanity the God-Machine gave them and becoming something more and less than they were. Now enemies of the Machine and all it stands for by default, demons now wage a secret war with the loyal angels, attempting to either destroy the God-Machine, reprogram it into something nicer, understand it, or simply live a semi-normal life.

And one and all, they are going to Hell.

Terminology: Every demon has an Incarnation, the purpose they were crafted for when the God-Machine sent them off on their mission. The catalyst is the reason why they fell in the first place, losing their connection to the God-Machine and bonding with the mortal Cover they used to pass amongst the throng of humanity. As one of the Unchained, a demon has an Agenda that is defined by how he views his role in the world, the role of the God-Machine in the world, and how he'd like those two to sync up. As individuals who were once part of the divine programming of existence, the Unchained have the ability to hack reality. These come in the form of Embeds, personal powers that can be installed into and used to unlock the personal node of potential known as a Cypher, and Exploits, external tricks that take advantage of some of the shortcuts of the God-Machine.