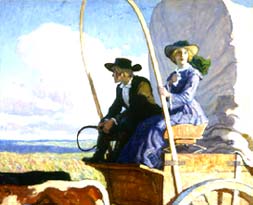 Image by N. C. Wyeth.
"How then am I so different from the first men through this way?
Like them, I left a settled life, I threw it all away.
To seek a Northwest Passage at the call of many men
To find there but the road back home again".
— Stan Rogers, "Northwest Passage"
Advertisement:

A person who is among the first to explore and settle a new territory. Almost a proto-Western character type since it started when "the West" was "out of sight of the Atlantic Ocean." The Pioneer is unsatisfied with his or her life in a settled land, and sets out to find out what lies over the river, or the mountain, or the prairie. Maybe they'll find the Northwest Passage, or that place with greener grass, or a land where a man has some elbow room—and maybe they won't. But they reckon it's worth the looking.

Often overlaps with the Hunter Trapper, as they seek out fresh territory for better hunting. If the pioneer settles down to start farming, he becomes the Determined Homesteader. The important aspect here is being first, or very close to first. Not all Hunter Trappers qualify, only the ones who went first. Not all Determined Homesteaders qualify, only the ones who first broke ground, the first cattle rancher, etc. Can also apply IN SPACE! or possibly even in pioneers of the mind. The Western, however, is the experience that encapsulated The Pioneer into an actual trope.

In stories where pioneers are the main or sympathetic characters, the previous inhabitants of the territory will generally be depicted as either scarce and dying out, or so uncivilized that they don't count. The pioneer generally has to fight not just hostile natives, but also dangerous wildlife, extreme weather and a certain amount of loneliness.

May be part of Settling the Frontier, and may be remembered as Our Founder. If the military moves into the area, he may find employment as an Army Scout or a Ranger.