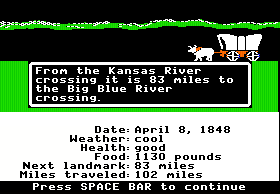 It's 83 miles to Big Blue River. We got a full team of oxen, half a box of bullets, it's 1848, and we're wearing sunglasses. Hit it.
"LITTLE JOHNNY has died of dysentery."
Advertisement:

If you went to an American school from the late 1980s through the Turn of the Millennium, and your classroom or school library was fortunate enough to have a monolithic, clicking heap of machinery called an Apple ][, chances are you remember a little floppy-disc based game called The Oregon Trail.

If you don't, the premise of this Edutainment Game, designed by three student teachers for their history class, is to lead your family across the American frontier of the mid-19th century to reach the promised land: Oregon. The game was originally created by Don Rawitsch, Bill Heinemann, and Paul Dillenberger, with the first version appearing back in 1971. Rawitch later got hired by the Minnesota Educational Computing Consortium. He used his new position to create an improved version of the game in 1974. It later became available in the organization's time-sharing network, where it could be accessed by schools across Minnesota. Further improvements, updates, sequels, etc, have continued appearing over the decades.

The game would start in Independence, Missouri, where the player could select from professions such as carpenter or doctor, which provided bonuses such as improved health or repairs, before purchasing provisions and heading west. On the long adventure that followed, the player would learn how to manage dwindling supplies, decide whether or not to ford rivers or caulk the wagon and try and float across (paying the ferry was for suckers), manage wagon breakdowns, deal with rattlesnake bites, help rid the West of the buffalo scourge, press SPACE BAR to continue, and lose at least three family members to dysentery. After finally arriving at Oregon, players would abruptly have to steer their wagon down a river, dodging rocks and rapids, before reaching Willamette Valley and the end of the game. There was an option to take a toll road and skip the river-riding segment, but again, that was for suckers.

The game was quite popular among both students and faculty; teachers liked it because of the historical aspect and the brain-building challenge of managing the expedition, while students enjoyed shooting everything between the Mississippi and the West Coast while leaving funny tombstones along the trail as the inevitable dysentery-related casualties accrued.

Because of its success, The Oregon Trail boasts a long series of ports, remakes, and sequels:

It also received a number of spinoffs:

The Oregon Trail remains a gaming classic and cultural icon which helped raise American dysentery awareness significantly, with parody musical The Trail to Oregon! and Zombie Apocalypse parody Organ Trail. It also happens to be the oldest title listed in the 2010 reference guide, 1001 Video Games You Must Play Before You Die, right before Pong.

This Troper has died of dysentery.

Example of:
The Wild West