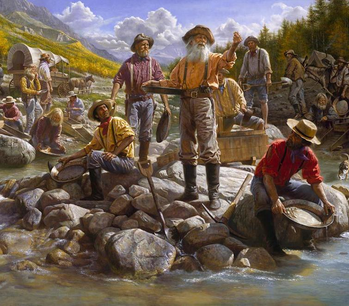 "Of the comrades all that I've had, there's none that's left to boast
And I'm left alone in my misery like some poor wandering ghost
And I pass by from town to town, they call me a rambling sign
'There goes Tom Moore, a bummer shore in the days of '49'"
—Bob Dylan, "Days of 49"
Advertisement:

When gold was discovered near Sutter's Mill, California in 1848, it brought a huge influx of people to the area, at first those already living in California and the surrounding areas, but when the story broke in the East Coast newspapers, from all over the world. San Francisco, the nearest port, became a Boom Town (after nearly becoming a Ghost Town when the denizens all flocked to the gold fields — San Francisco's population very briefly fell to just 250 at its lowest point before arrivals from the east came through. An editor even bemoaned the impending death of the namesake city in one editorial — it was his last article before leaving town to find gold.)

They became known as "'49ers" from the year when the biggest crop of would-be miners arrived. At first, finding gold was easy, and the miners prospered. But as the most obvious sites played out, the surface deposits became exhausted, mining required more and better-skilled effort, and competition grew for the best claims. By 1855, only large mining companies were still viable, and the Rush was over. Most of the Forty-Niners went on to other professions in the newly-booming states; a few stubbornly stayed in the prospecting business, moving from site to site in hopes of striking it rich elsewhere.

This character type includes those who moved to California to take advantage of the gold miners, but did not themselves mine the ground. For other people searching for valuable minerals, see Prospector. For the San Francisco sports team that takes its name from these miners, see National Football League.