Series / Star Trek: The Next Generation 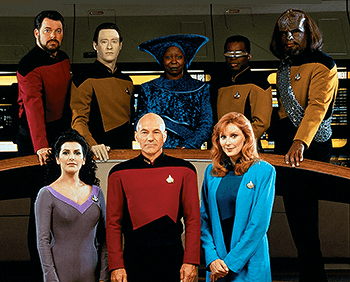 The crew of the USS Enterprise, NCC-1701-D.note Top, from left to right: William Riker, Data, Guinan, Geordi, Worf. Bottom, left to right: Deanna Troi, Picard, Dr. Beverly Crusher. Wesley's holding the camera. Better than anyone else could, no doubt. Especially Tasha.
"Space: the final frontier. These are the voyages of the starship Enterprise. Its continuing mission — to explore strange new worlds, to seek out new life and new civilizations, to boldly go where no one has gone before!"
— Captain Jean-Luc Picard, the series' legendary opening credits
Advertisement:

Star Trek: The Next Generation is a science fiction show created by Gene Roddenberry as part of the Star Trek franchise. The show ran from 1987 to 1994 in First-Run Syndication, and proved to be one of the most successful shows ever to be offered through that distribution method. Set in the 24th century, about ninety years after the original series, the program features a new crew, new perspectives on established cultures (a Klingon Empire as a semi-friendly ally against a Romulan Empire emerging from decades of isolation), new antagonists and a new Enterprise (Galaxy-class starship, registration NCC-1701-D).

After struggling for a few seasons trying to establish itself apart from the original series, it exploded into one of the most well-respected television shows ever made, partially because of a change in direction (its creator had health problems starting around season two of the show's run leading to co-producer Rick Berman taking over most of the show's daily production and his promotion to executive producer during season three) and an increased willingness to experiment with the format and scope of the show, and science fiction as a whole. At 176 episodes in length, it was the longest running Star Trek series at the time,note It was equaled by two of the three series to follow it, but has not been surpassed. and won many awards for everything from visual effects to writing. Like its predecessor, the series has proved wildly popular in Syndication, despite having broadcast its final episode in 1994. To date, in the U.S. alone, it has been broadcast on no fewer than five different cable / satellite networks: G4, Spike TV, Syfy, WGN America and BBC America. Three of these networks, SyFy, WGN America and BBC America, still regularly air episodes of the program, sometimes against each other in primetime. It also remains a near-pillar of Netflix and for that matter is on several other streaming services as well.

Although much of the show shared the premise of The Original Series, there were also well-placed Story Arcs (something the original series lacked): the omnipotent trickster character of Q would show up to put Humanity on Trial (becoming a Bookend storyline epitomizing the series) or to amuse himself at the expense of others; redefining the Klingons as being Proud Warrior Race Guys instead of the original "black hats"; various encounters with the hive-mind, cybernetic Borg (creating what is regarded as the pinnacle episode for the series and even the franchise, "The Best of Both Worlds"); several episodes with Wesley that developed his character; and defining moments for several of the main cast and the odd minor character, in addition to plenty of development for the Romulans, the Vulcans, the Cardassians and the Ferengi.

The series went into production following the success of Star Trek IV: The Voyage Home and would later form the basis of the seventh through tenth Star Trek films: Generations (1994), First Contact (1996), Insurrection (1998), and Nemesis (2002). The success of the series led to an expansion of the franchise and is single-handedly responsible for the creation of Deep Space Nine, Voyager and Enterprise. TNG, DS9 and Voyager are often called the "Next Generation Era" in discussions regarding the franchise as a whole. Star Trek: Lower Decks (2020) is set just after Nemesis and makes many references to people and places from the Next Gen era shows.

Though fans will usually agree that the quality of the episodes varies wildly, all but the very worst of the lot usually makes for compelling and thought-provoking viewing. Even boilerplate stories such as "clueless foreigner offends alien culture" or "Aliens took my Bridge Bunny" are handled in a similar manner to TOS, with Picard and company carefully explicating and deliberating over each problem. With the Federation existing in a relative state of calm and "cowboy diplomacy" no longer a viable option, the challenge is remaining true to Starfleet ideals without resorting to quick and dirty solutions... and also trying to realize when it's time to get "dirty".

Although firmly a genre show that aired during an era when the Sci Fi Ghetto was in full effect, Star Trek: The Next Generation was one of the most acclaimed television shows of its day. The episode "The Big Goodbye" won the show a Peabody Award in 1987, the only one ever received by a Star Trek show or episode. In 1994, for its final season, TNG was nominated for the Emmy Award for Outstanding Drama Series, making it the only syndicated program ever to be nominated for that prize (It lost to Picket Fences).

(who designed several visual elements of the show including the main bridge design and the LCARS system used by the Federation) to oversee high quality Blu-ray transfers of the entire series from the original film stock to replace the poor quality DVD versions of the series. More information can be found at the Trek Core website

, among other places. The general consensus is that the 1080p, 7.1 surround sound mixes breathe new life into the show, with the special effects work by Industrial Light & Magic looking especially stunning. The remastering of TNG has proven to be far less controversial with purists than the extensive (many argued overdone) HD revisions done to the original series.

See also the Star Trek: The Next Generation Relaunch, a series of novels that follow the characters after the events of Star Trek: Nemesis, as well as setting the direction for the Star Trek Expanded Universe in terms of the original continuity (as opposed to the latest series of films, which take place in an Alternate Timeline).

Star Trek: Picard, which premiered in January 2020 on CBS All Access, is a Distant Sequel to The Next Generation, with Patrick Stewart reprising his role of Picard, and other TNG and Voyager characters appearing in supporting roles.

The Enterprise E, under the command of now captain Riker, is on it's way to the Wolf system to join the fight against a Borg cube with a fleet of Federation ships. However when they arrive, the battle is already over and the Federation lost.

The Enterprise E, under the command of now captain Riker, is on it's way to the Wolf system to join the fight against a Borg cube with a fleet of Federation ships. However when they arrive, the battle is already over and the Federation lost.