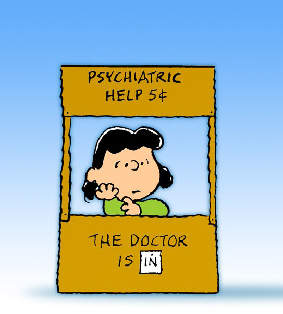 The mental health field is a complicated one. And fiction writers aren't necessarily fond of complicated real-life concepts. That's why you get tropes such as All Psychology Is Freudian. When even that is too much, you'll see There Are No Therapists.

But that's obviously quite unrealistic. There are, in fact, psychologists and psychiatrists in this crazy world of ours. And this trope is dedicated to the portrayal of them in fiction. There are three general portrayals:

Sillier examples of the first two types are often portrayed as bearded men with Viennese accents.

Also, all three types are Truth in Television, which is why seeking therapy in Real Life is sadly so difficult: the people most in need tend to be the least equipped to be good mental health consumers — which is required to get the most out of therapy by knowing what kind of therapy you need and finding a therapist that is awesome (and not the first or second variants, or incredibly judgmental/unable to empathize with one's lived experience). Ending up with the awesome variant on the first try is often not possible even for the financially well off who can choose whomever they want, much less for someone just stuck with whomever their insurance/public assistance will pay for. This is one reason why some people might choose to go without therapy, even people with major disorders.

Compare with Psychologist Teacher. Patients visiting The Shrink may well lie down on a Freudian Couch for therapy. A shrink who fights is a Warrior Therapist.

Well-Meaning, But Dopey And Ineffective
Anime and Manga

Example of:
Get a Hold of Yourself, Man!