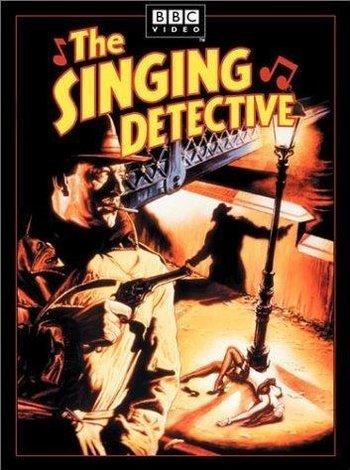 A British miniseries of the 1980s written by Dennis Potter. The plot concerned Philip Marlow, a writer of pulp detective novels, who is hospitalised with a severe case of psoriasis (a debilitating skin disease). In order to escape from his misery, he fantasises that he is the hero of one of his novels, The Singing Detective, who is a nightclub singer and private detective. However, a combination of drugs and a fever causes him to lose the ability to tell fantasy from reality, and his dreams of his novel, his day-to-day life in hospital and his memories of his childhood all begin to merge. The series attracted controversy at the time of broadcast due to a graphic sex scene, but it is now recognised as one of the best TV dramas ever.

It was adapted into a Hollywood movie in 2003 (starring a pre-career-resurrection Robert Downey Jr.) that was poorly received and is now pretty much forgotten.

Philip Marlow is played by Michael Gambon, who would go on to play a similarly debilitated and miserable hero in Harry Potter and the Half-Blood Prince.

Due to Dennis Potter's love of genre drama, numerous tropes are lampshaded, subverted, justified, played with and/or played straight.