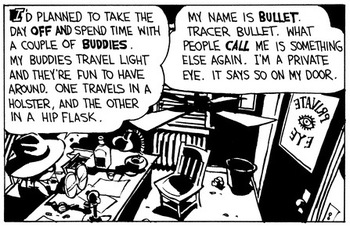 Cue Brick Ballades.
"The rain was comin' down like all the angels in heaven decided to take a piss at the same time. When you're in a situation like mine, you can only think in metaphors."
— Dick Justice, Max Payne 2
Advertisement:

The signature narration style in Film Noir. A bored-looking, world-weary, utterly cynical detective (hardboiled and/or defective) with his feet on the desk meets a Femme Fatale, while the voiceover gives us his mental play-by-play:

"She walked through my door like a tigress walks into a Burmese orphanage — strawberry blonde and legs for hours. No dame her age could afford a coat like that, and the kinda makeup she had on gave me a good idea how she got it. She had bad news written on her like October of '29."

The Private-Eye Monologue is characterized by certain pronunciation and speech patterns that make it immediately recognizable and utterly cool. The most basic rule to remember is that it is a monologue, so it is spoken (not written), preferably in a deep chain-smoker baritone. The last (or second last) word in the sentence is emphasized, to make clear where it ends. Short, choppy sentences in past tense with little conjunction (buts, howevers, and therefores) between them are preferred, and the lexicon mainly consists of short, simple words; that's why such monologues are so super quotable. Purple Prose and most Big Words are taboo.

The most important aspect is thinking-in-metaphors. Creative metaphors and similes are the alpha and omega of a good Private-Eye Monologue, in stark contrast to the simplicity of the vocabulary. They demonstrate the relatively good education of the speaker without estranging him from the audience by sounding geeky. References to popular culture and politics are pure win. Mentioning the climate and the current weather, usually in the beginning, is often a must. Even more impressive are religious (Judeo-Christian) symbolism and mythology, just don't overdo it. Repeating a metaphor or simile is a faux pas.

Must be black and white, with preference given to grimy offices, frosted-glass doors, half-open Venetian blinds, and a cheap and conspicuously open bottle of hooch. Bonus points for saxophone music or impractically slow ceiling fans.

Tends to make one wonder how someone so jaded could have such a fertile imagination, or why he isn't a poet or a public lecturer.

When done well it is always a consistent narrative. Done badly, this monologue just becomes laughable amounts of complaining like a spoiled emo teen.

Nigh impossible to play straight these days. The tough First-Person Smartass, of course, is far from dead.

See Captain's Log for voiceover of the lead character talking out a journal or diary entry.

open/close all folders
Advertising
Anime & Manga
Comedy
Comic Books
Comic Strips
Fan Works
Films — Animation
Films — Live-Action
Literature
Live-Action TV
Music
Podcasts
Radio
Tabletop Games
Theater
Video Games
Web Comics
Web Original
Western Animation
The troper made it all the way to the end of the page. They had more time on their hands than a clock maker. All I could wonder now was how long they'd wander on their Wiki Walk, trudging onwards into the sunset with no destination.
Feedback

Naturally, as a parody of the archetype and the genre, he uses it frequently, complete with silly disconnect between what he reports and what the audience sees.

Naturally, as a parody of the archetype and the genre, he uses it frequently, complete with silly disconnect between what he reports and what the audience sees.