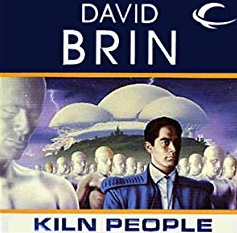 Kiln People is a 2002 science fiction novel by author David Brin. The book is set in the near-future, where technology allows people to place a copy of their consciousness into a life-size model of their body made of clay, completely revolutionising society. The story follows private detective Albert Morris and his duplicates, or 'dittos', as he chases the criminal Beta and investigates the disappearance of Yosil Maharal, the creator of the ditto technology.