Film / The Element of Crime 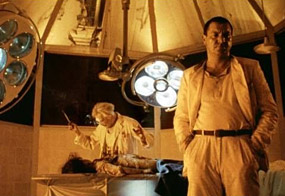 The Element of Crime is Lars von Trier's 1984 debut film, a Genre-Busting movie, a Science Fiction film as well as a Psychological Thriller with plot and characters typical of Film Noir, but the general atmosphere of a Cyberpunk with a Chance of Rain story, located in immediately post-World War III Europe, with surrealist undertones, and the whole thing filmed in a fashion homaging expressionist movies. The result is one of the gloomiest movies ever directed which makes even Blade Runner look bright and optimistic.

It tells the story of detective Fisher, expatriate in Cairo, who undergoes therapeutic hypnosis in order to recall the events of his last case, which left him quite traumatised. The rest of the movie thus consists entirely of a flashback of said events: the search for an elusive child killer, using a controversial profiling method created by his former mentor and described in a book, the titular Element of Crime.

First film of the Europa trilogy.