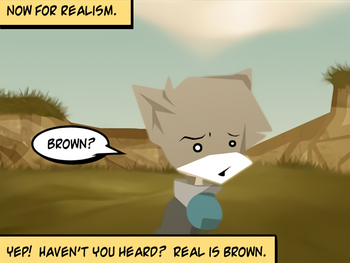 All that's left is to make it dark and add some bloom, and you're all set.

Desaturating or heavily tinting a game a single color for the sake of realism, usually to a sepia effect (hence the trope name), but sometimes blue or pure grey.

Giving a game a narrow color palette can make it look gritty, dramatic and "realistic" and stand out from similar titles. Done well enough, a game and its color scheme will always be associated with each other. In practice, this means a world of brown, grey, and the occasional red (y'know, from the blood splatter on the camera).

A handful of 2D and early 3D games used this to make up for a limited number of onscreen colors, as they operated on limited-size color palettes, and requiring more hues to display a scene meant sacrificing subtle variations in saturation and brightness for those hues (as each variation requires a separate color in the palette). Starting with the PlayStation and the Nintendo 64 the colours became less restricted, allowing for games that had wider palettes and thus could support many different shades of grey, blue and brown. But the golden age of this trope came when consoles became powerful enough to use color grading effects, not even a decade after films began to use it themselves. With almost no examples to guide developers and an eagerness to stand out from the previous generation, it was both easy and tempting to abuse color grading.

It was also used to cover up a limitation of lighting and shading engines - a light shines down and illuminates an object from that side, sure, but figuring out where the light goes after that and what else around it might also be illuminated (a process called interreflection) is extremely difficult for the computer to simulate, especially when it needs to do so 60 times every second. Until around the eighth generation of console games, the only solution was to use static lighting (accurate light and shadow mapping planned out in advance) and while reasonably effective, it comes at the cost of not having dynamic or interactive terrain or lighting, which in turn means no smooth day/night cycling or destructive terrain physics. Again, if everything is tinted one dull color, it's not as noticeable.

Unfortunately, at a certain point your players will take a look outside their window and back at your game, and something will seem wrong. Why are those palm trees brownish green, even though you're supposedly on a tropical island? Brown may be realistic for some surfaces, but not for all of them, and everything is best taken in moderation, otherwise you'll end up with a game that's Deliberately Monochrome. Realistic titles in the modern day will often use this, and it's practically a stylistic requirement of gritty post-apocalypse titles to show how wrecked the state of the world is.

It's becoming increasingly common for colorful games to mockingly parody this trope, usually by including an optional "next-gen" filter that tints the whole game brown. This, combined with noticeable improvements in graphics rendering technology since the heyday of the trope, means Real Is Brown has all but become an Undead Horse Trope, with the exception of a few franchises launched in the 7th generation. It's also become a Cyclic Trope similar to what happened with gritty comic books: while the sixth and seventh generations emphasized titles which did this, the eighth and ninth more proudly displayed colourful and saturated titles as a reaction. In addition, the introduction of the color- and contrast-improving High Dynamic Range (HDR) technology into many modern TVs has further caused many gaming companies to lean on wide color palettes to both provide rich and colorful Scenery Porn, and to ride on the HDR trend.

That's not to say this trope has no artistic merit: the visual effect of Real is Brown does work in instilling a serious appearance, and any moments that do have saturated colour will stand out much more than they would have otherwise. Similarly, a colourful work may bring in a more muted colour palette for a dramatic, serious and less hopeful part of the story to reflect the mood. That said, the heart of this trope is less the palette itself and more the comical overuse of it in practically every realistic video game in the mid-2000s, instilling the belief in both creators and the audience that a serious story can't be taken seriously if it has saturated colours. Needless to say, this kind of viewpoint is laughable these days.

Compare Gold Is Yellow. See also Mood Lighting, Color Wash. The use of Post-Processing Video Effects makes Real even Browner. See also the sister trope Who Forgot the Lights?, which deals with a shortage of light in general. This trope is usually when Color Contrast is deliberately avoided. Usually paired with a Crapsack World for added "realism". Warm Place, Warm Lighting is a related trope specific to filming, where media stereotypically portrays warm and poor locations like Mexican or Latin American settings in a dusty yellow/brown filter to imply an arid, dusty, polluted look.

NOTE: This trope does not apply to a game taking place in an environment that actually would be gray or brownish in Real Life, like a lot of deserts, or a bombed-out cityscape. Unless they're just set in a desaturated environment to make their lack of color look like a deliberate design choice.

The 2006 movie, on the other hand, went for Orange/Blue Contrast, giving it a much blander look that was not well received.

Software
Web Comics
Web Original
Cranky Kong: Bah! When I was a young fella, the technology we had only let us use 25 colors on screen at a time. Now we see people using even less than that by choice. Kids these days...