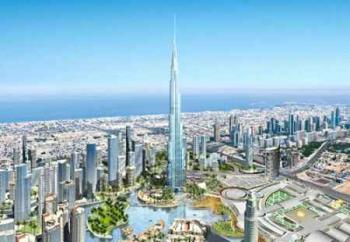 The city skyline, with the Burj Khalifa in the center.
"Gentlemen, welcome to Dubai."
— Various characters, Spec Ops: The Line
Advertisement:

Prior to the 1970s, Dubai was no more than your average Arabian fishing village located right at the basin of the Persian Gulf, with a population of only around 60,000. Following the formation of the United Arab Emirates in 1971, and the realization of just how oil-rich the town and its surrounding area truly was, development picked up at near-breakneck speed. Now an overnight Boom Town, the city has become a playground for the rich and well-connected, with ultra-luxury shopping, expensive attractions, supercars and luxury vehicles clogging the roads, yachts and catamarans rubbing shoulders with wooden dhows within marinas, decadent airline flights from the city's airport where even economy class is considered luxuriant, and land being razed in order to raise exclusive apartment towers seemingly monthly. Among its most notable monuments to this include the tallest building on the planet, the Burj Dubai Burj Khalifa, which is 828 metres (2,717 feet) tall; The Burj Al-Arab (a sail-shaped, self-proclaimed seven-star hotel), the Palm Islands (three massive, palm-shaped artificial islands), and The World (similar to the Palm Islands, but the archipelago is in the shape of Earth's continents, and is nine kilometers wide).

While still bustling with activity, the city's meteoric rise reflected its artificial nature: the city's hastily-made-manifest urban planning was made evident upon the realization that the city lacked any sort of sewage system, with convoys of septic tanker trucks soon seen coming to and from the city regularly; skyscrapers, including the Burj Khalifa, were built en masse without the actual demand for such buildings existing to justify them, resulting in much unused space; the Palm Islands were ambitious vanity projects that died before even coming remotely close to completion, with the most completed one, the Palm Jumeirah, near-instantaneously turning into an insect-filled lagoon, no thanks in part to its artificial sand barrier; The World being almost uninhabited and totally undeveloped beyond the existence of the islands themselves, and the third of the Palm Island formations being only barely constructed before all work was ceased. The 2009 Great Recession, coupled with the 2016 oil price crash, would bring development of the city to a down-on-all-fours crawl, with most of Dubai's greater ambitions, then set to see completion by the turn of the decade, left to wither on the vine.

Nevertheless, despite all of its flaws (some of them rather absurd), Dubai remains a major socio-political and economic hub in the Middle East that was artificially grown in a relatively short amount of time—nothing short of an impressive feat of human ingenuity.

Worth mentioning: some of us here at TV Tropes would like to know whose idea it was to build a gargantuan, filled-to-the-brim-with-luxury-brands shopping mall. Stiff competition's inevitably afoot.