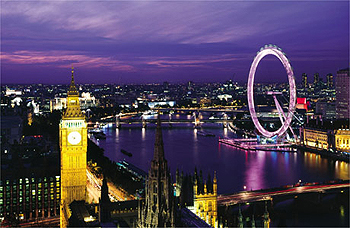 The city skyline, with Elizabeth Tower (AKA Big Ben)

and the London Eye

in the foreground.
"Why, Sir, you find no man, at all intellectual, who is willing to leave London. No, Sir, when a man is tired of London, he is tired of life; for there is in London all that life can afford."
— Samuel Johnson
Advertisement:

To Hollywood (and depressingly often to British media as well), Britain Is Only London. How they portray the place is generally split into two approaches:

Where The Streets Are Paved With Gold

Where The Streets Are Paved With Excrement

Where The Streets Are Paved With Both

In Real Life, London is very much a combination of the two and there's very much a sliding scale. London does have a rather notoriously high cost of living, so it tends to be like a lot of cities, full of both people who can comfortably afford it, and people who can't but have to live where the jobs are. On one end, you've got ludicrously posh places in the west central part of the city. In places like Holland Park, Belgravia, and Mayfair, the richest people in the world conspicuously consume like it's going out of style. At the other end, you'll find some of the most deprived places in the nation, known as "sink estates", in areas like Peckham, Hackney, and Harlesden. The really poor places — as seen in Oliver Twist — started disappearing with slum clearance in the 1920s and 30s, with the Luftwaffe obliterating the rest (and some posh places too) during World War II. The important thing to note however is that most neighbourhoods are very mixed income. Council estates can be found in the wealthiest boroughs and million pound properties in the poorest.

Various areas of London (we're using the Greater London Authority area, although people in a number of those areas don't always consider themselves Londoners) have their own stereotypes:

The Famous Streets of London

London has many famous streets. Some are best known from the UK version of Monopoly:

When you're walking around inner London, you might see codes like E1 and WC3 on the street signs. These are the UK's equivalent to the first five digits of US zip codes, but are far more widely known in the UK, although they only appear on street signs in certain places.

Certain post codes are more desirable than others. E1, the heart of the East End, has now become pretty attractive.

British opposition politicians refer to "a postcode lottery" in terms of public services provision — with different areas having different levels. This is due to day-to-day running of schools and hospitals being devolved to special local authorities, such as an LEA (Local Education Authority).

These are sometimes rendered by their compass points, as in the name of the boy band East 17 (Walthamstow), later E-17. Note that except in the case of EC (1-4) and WC (1-2), the numbers following the compass points are arranged not in geographical order but in alphabetical order of the main borough covered by each number - except 1, which is always the nearest to central London.

E98 is a code allocated for News International.

There are now sub-divisions for postal purposes, e.g. EC4Y for the Temple area in the city of London.

The London Postal District is far smaller than Greater London, so areas outside it use their traditional county names, such as "Barking, Essex" and the "Brentford, Middlesex" (abolished in 1965 as an administrative county), which is the name of a cricket club.

London has six main airports (plus some smaller ones), all of which have featured in fiction at some point. Not all of these are inside the Greater London area.

Airlines will often sell tickets to airports they claim to be "London" but are nothing of the sort. A certain Irish airline was fined a few years back for selling tickets from Sydney, Australia to London Prestwick, Prestwick being an airport on the outskirts of Glasgow, a seven hour train journey away. Arguably, Stansted and Luton were under this category for years, until the likes of easyJet started moaning about it.

London is also a major port. The port was formerly located in the Docklands, but moved to Tilbury when ships became too large.

London also has the Eurostar train service to mainland Europe. This used to run out of Waterloo (which features in the film of The Bourne Ultimatum), but has now moved to St. Pancras as of 2007, which frankly needed some love - the only thing that went from there was the Midland Mainline service. It might also have something to do with the fact that someone high up eventually realised that forcing French travellers to arrive at a station named after one of their most famous military defeats was, while funny, also less than tactful.

To get around London by car (going through it most people will tell you is pointless, given the traffic congestion and the congestion charge during weekdays) you'll need to navigate the M25 (AKA the world's largest car park, although not so much since they widened it. Although the way things are going, it'll end up like that again), the motorway which circles most of London (the only gap being the Dartford Crossing which is part of the M25 in all but name). A word to any inexperienced motorists who plan on attempting to use the M25 - don't, it will suck out your soul.

Other Bits Of London in fiction