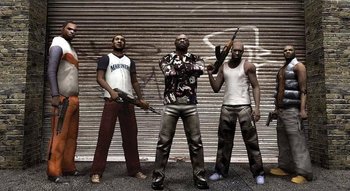 Jeremy: Or I could shoot Martin, or I could hire some yardies to shoot Martin.
Mark: Jeremy, the yardies aren't going to solve all your problems. Why do you always think that the yardies are the answer to everything?
Jeremy: [thinking] The yardies will help me. I just need to get a number for the yardies.
— Peep Show

Catch-all term for black gangsters in United Kingdom settings, although it originally applied to groups from the British West Indies (specifically Jamaica). The name comes from the common area courtyards found in Trenchtown, the impoverished housing project in West Kingston, Jamaica. While the term was originally used for all residents of Trenchtown, it later applied only to the large number of criminals and gang members that also lived there.

Nowadays Yardies come from all backgrounds as immigration policies have allowed people of all walks of life the opportunity to come to England and live in low-income neighbourhoods. See Gang Bangers for their American counterparts.