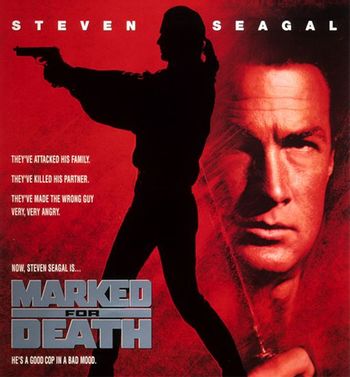 "One thought he was invincible, the other thought he could fly. They were both wrong."
Advertisement:

Marked for Death is a 1990 action film with Steven Seagal in his third starring role.

Seagal plays DEA agent John Hatcher, who has just retired and returned to his home in Chicago following a drug bust in Colombia in which his partner was killed. His experiences have left him disheartened; he believes that there is no way the drug flow could ever be stemmed. Alas, a confrontation breaks out between him and some goons of the Jamaican drug-dealing ring Jamaican Posse who are flooding the streets with drugs. The next day, some members of the gang including its leader, Screwface (Basil Wallace), shoot Tracy (Danielle Harris), the daughter of John's sister Melissa (Elizabeth Gracen), in a drive-by shooting. Screwface then returns to Jamaica. John, alongside old friend Max (Keith David) and Jamaican cop Charles (Tom Wright), embarks on a Roaring Rampage of Revenge through Chicago and eventually Jamaica to take Screwface out.

Though not quite so famous as Above the Law (1988) or Hard to Kill, this film is one of Steven Seagal's better ones; a fine example of his brand of action and which showcases him at his limb-snapping, wisecracking best.