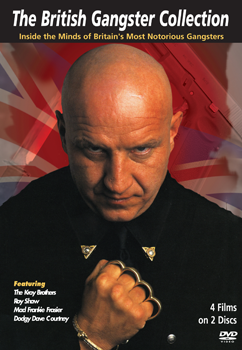 The Mafia.... BUT BRITISH!! Since Britain Is Only London, London Gangsters are the British criminals we know best.

The London Gangster is a hard man in a sharp suit with a fondness for Cluster F Bombs and Country Matters. He'll tend to prefer roughing people up with his bare hands to using guns (gun control being very strict in the UK),note Whilst it would be possible for guns to be smuggled in, in certain cases acquired legally, or via the black market, the other reason these gangsters don't use guns is that gun crimes in the UK are extremely low compared to the US. Whilst a gun-based homicide could be common in the US, and therefore not looked into as thoroughly, British police don't get as many shootings as stabbings, and so investigate shootings more thoroughly, as there is a higher chance the gun was acquired illegally. Not using a gun also helps these characters keep the heat off. but Cold-Blooded Torture isn't at all out of the question and the really nasty ones in fiction have a tendency to be Psycho Knife Nuts. He speaks in a working class East London, Cockney or South London accent, and his dense slang may feature a little Yiddish.note The East End of London traditionally had a large Jewish population, and some London Gangsters, like Historical Domain Character Jack Spot from Once Upon A Time In London and the fictional Harry Stark, are Jews.

The Don of a London gang is usually a Shout-Out to the Kray twins, a pair of famous British gangsters in the 50s and 60s. He's a Self-Made Man and/or Nouveau Riche who's fiercely proud of having worked his way up from the gutter — even if that "work" involved scaring other people into giving him money. He's charismatic and generous when you're on his good side and a terrifying psychopath when you aren't.

Occasionally a particularly transparent Shout-Out to the Krays will go as far as featuring tropes from their lives, like Big Bad Duumvirate, Siblings in Crime, Creepy Twins, Even Bad Men Love Their Mamas, and Gayngster. As you might have gathered, the Kray twins are iconic in the UK — Britain's answer to Al Capone.

We almost never see gangsters from Oop North, despite Manchester and Liverpool having considerable levels of organized crime in real life. The Yardies, however (Afro-Caribbean gangs, originally from Jamaica) are bound to get a mention.

See also: The Mafia, The Irish Mob, The Triads and the Tongs, The Mafiya and White Gangbangers which may overlap with the London Gangster.