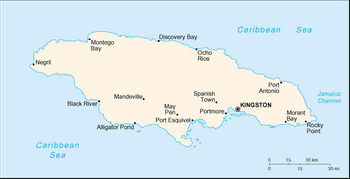 You must be Jamaican, because Jamaican me crazy!
Advertisement:

No, it was her own decision...

Now that the Obligatory Joke is out of the way, let's discuss the country. It was discovered (or re-discovered) by Christopher Columbus on his second trip to the West Indies in 1493. It was wrested from the Spaniards by the British in 1655 during Oliver Cromwell's administration, and was a British colony until its independence in 1962.

It was one of the world's leading producers of sugar during the days of slavery, in its first 200 years of British rule; between 1820 and 1824, it produced up to 77,000 tons of sugar annually for export.

Famous for its national fruit, ackee (although the fruit is actually originally native to West Africa), and for the national dish of ackee and saltfish, the latter item being salted codfish. (Recipes for the dish can be found here

Its national tree is the Blue Mahoe (used widely in cabinet-making, furniture-building and wood carvings); its national flower is the Lignum Vitae (used to treat coughs and arthritis, and also brewed into a kind of tea, and its incredibly hard and rot-resistant wood is used to make a variety of items); and its national bird is Red-Billed Streamertail hummingbird (nicknamed the "Doctor Bird" and featured in Ian Fleming's James Bond short story "For Your Eyes Only").

Also famous (or infamous) for being the site of the piracy capital of the 17th century, Port Royal, which was then governed by former privateer Henry Morgan, before being ripped apart by two earthquakes, fires, hurricanes, floods, and epidemics. The city got rebuilt, though.

Unfortunately, Jamaica also has a reputation for having a violently homophobic culture and society, to the point that descriptions of the level of homophobic violence and discrimination within the country make it sound like it would be approved by Fred Phelps. (Terry McMillan's husband fled the country for this reason.) However, the former Prime Minister, Portia Simpson-Miller, declared that she is in favour of civil rights for LGBT citizens, while the current Prime Minister, Andrew Holness, stated that he would have no problem employing LGBT citizens to serve in his parliamentary cabinet.

Jamaica is divided into fourteen parishes, which are in turn separated into three main counties:

Has seven National Heroes, listed below:

Montego Bay, the capitol of St. James and the "Second City" of Jamaica, is touted as the island's "Tourism Mecca." As of the end of 2010, Jamaica copped numerous honours at the World Travel Awards in October, was named Best Honeymoon Destination and Best Tourist Board by the Canadian travel industry in November, and got the Best Caribbean Destination Award at the annual Travel Weekly Readers' Choice Awards in Manhattan (for the second year in a row) in December.

Jamaica has a lot of Urban Legends revolving around ghosts, locally known as "duppies." The most well-known one is the claim that the Rose Hall Great House, located on the north coast outside of Montego Bay, is haunted by the ghost of former owner Annie Palmer, a slave-owner who is claimed to have murdered three husbands and a LOT of lovers, is said to have been a practitioner of black magic, and was basically a monster, Rich Bitch and Bitch in Sheep's Clothing. Just go ahead and try to sleep on the grounds of the Great House, much less in the mansion, for just one night. Go ahead. (Heads up: the security guards won't allow you to.) Other local legends involve the Golden Table (a table covered in gold coins that is said to be in a local river and results in the drowning of anyone who tries to pull it out), the Rolling Calf (a ghostly cow that shows up late at night to roadside travelers), the supposed spirits that live inside cotton trees, and others which are outlined in this video

Jamaica has also been acknowledged by the Guinness Book of World Records. The country's achievements, as a nation and by individuals, are listed below:

Oh, and Jamaica really does have a bobsled team

and a surprisingly good one at that.

For further and more in-depth information on Jamaica, check out The Other Wiki's main entry and all the links therein