Film / For Your Eyes Only 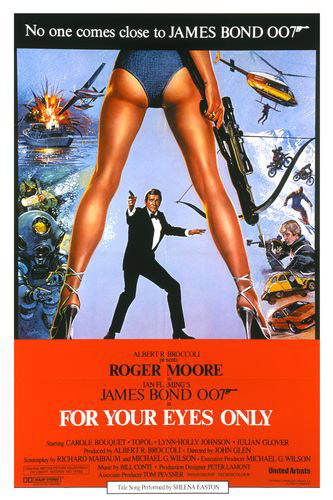 You can see so much in me, so much in me that's new...
"The Chinese have a saying: 'Before setting off on revenge, you first dig two graves.'"
— James Bond to Melina Havelock
Advertisement:

The One With… The Alleged Car chase.

For Your Eyes Only is the twelfth film in the Eon Productions James Bond series, the first to be directed by John Glen and the fifth to star Roger Moore. It was released on June 24, 1981. The Title Theme Tune was performed by Sheena Easton.

James Bond, after visiting Tracy's grave and dropping someone who strongly resembles Blofeld down a chimney, is sent to find a British ship that accidentally fished out a mine and sank in the Mediterranean Sea. Unfortunately, it contains a secret device that sends orders to British nuclear missile submarines. To make matters worse, the two people who were charged with searching for the ship were murdered. While shadowing his target, he is captured and then saved via a crossbow bolt, after which he meets Melina Havelock, the Girl of the Week and an Action Girl with a crossbow who wants to get revenge for her murdered parents.

This film is somewhat of a mish-mash of two Ian Fleming's short stories, "For Your Eyes Only" (Melina's plot) and "Risico" (the smugglers plot), with the climax from Live and Let Die thrown in and and the MacGuffin subplot created to put all these plots together.

As a reaction to the Denser and Wackier adventure in the previous movie, Moonraker, the producers chose to bring James Bond back to reality, to more seriousness, and to the Cold War climate. John Glen, who was the editor and second unit director of three of the previous films, was promoted to director. Michael G. Wilson, Albert R. Broccoli's stepson, would also write the screenplays along with veteran Richard Maibaum, helping with this transition of Bond to the 1980s. Under the command of Broccoli, Wilson, Glen and Maibaum, the James Bond franchise would return to a more serious and realistic atmosphere, with Bond surviving thanks to his courage and intelligence rather than gadgets.

Preceded by Moonraker and followed by Octopussy.

For Your Eyes Only provides examples of:

In the final scene of "For Your Eyes Only", Melina Havelock invites Bond onto a moonlight swim. When Bond receives a call from Mi6, he discreetly places his transmitter beside Melina's parrot before the two go swimming, during which the end credits play.

In the final scene of "For Your Eyes Only", Melina Havelock invites Bond onto a moonlight swim. When Bond receives a call from Mi6, he discreetly places his transmitter beside Melina's parrot before the two go swimming, during which the end credits play.