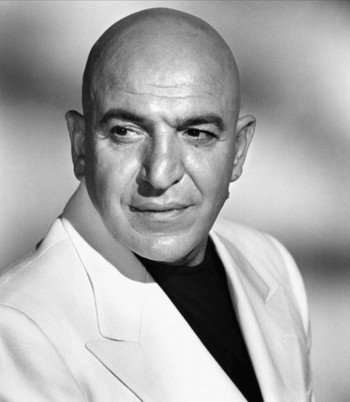 "I'm a romantic realist. I knew I would become a star, just as I know some day the bubble will burst."
Advertisement:

His movie and television career spanned more than thirty years, with quite a few iconic roles such as Archer Maggott in The Dirty Dozen and James Bond's Arch-Enemy Ernst Stavro Blofeld in On Her Majesty's Secret Service. His most memorable TV role was undeniably the lollipop-chomping NYPD Lieutenant Theofilides "Theo" Kojak in Kojak.

He became the stepfather of Nicollette Sheridan after dating her mother Sally (meeting her on the set of On Her Majesty's Secret Service). He was also the godfather of Jennifer Aniston, having been friends with her father, John Aniston.