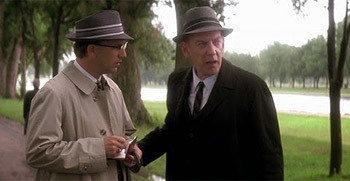 They were in St James's Park, watching ducks on the lake. Defectors, spies, tramps and shady-dealers congregated in twos on the benches. Wardens who picked up litter with spiked sticks here had a higher security clearance than the Secretary of State for Defence. Old government secrets, obsolete weapons plans and two-way mirror compromising filmstrips were always found in the grass.
— Moon Moon Moon by Kim Newman
Advertisement:

Paradoxically, the best way to hide a secret meeting is often to hold it somewhere extremely public. Locations like this can be selected to be unpredictable to anyone who you might want to avoid, are almost certainly bug-free, and can provide a layer of plausible deniability when the people in question aren't supposed to be meeting each other at all.

The classic situation where this occurs is meetings between members of two different secret government agencies; in that case they're not only dodging eavesdroppers, they're also making it more difficult for either agency's goons to do anything untoward.

Stock locations for this kind of meeting include:

For an extra layer of security, sometimes the two people meeting will sit back-to-back so it doesn't look like they're talking to each other — on park benches facing in opposite directions, or at adjacent tables in a restaurant.

Of course, while this kind of meeting decreases the odds of being noticed by the specific people you're trying to avoid, it substantially increases the odds that your conversation will be overheard by random passers-by. This is generally glossed over, though sometimes it's nodded at by selecting an exceptionally loud meeting place, or by having the characters speak in some way that appears innocuous: Trouble Entendre, Talking through Technique, Spy Speak, or the like. Or it's assumed that those random passers-by simply won't give a damn. This is somewhat justified actually. If you are discussing something highly technical using lots of jargon, then most people will have no idea what you are talking about. Not only will they be unlikely to think that your conversation is significant, they also won't be able to remember it very well even if the authorities start asking about it later. This also works better in places where both you and most of the other people are moving around: because then nobody will be able to catch more than a small slice of your conversation.

If the messenger doesn't show up for the meeting, the situation has changed into a Doomed Appointment.